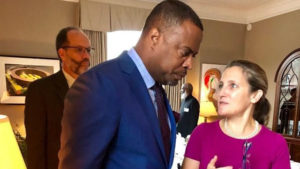 St. Kitts and Nevis nationals will no longer have to travel to Canadian embassies for visa interviews.

Minister of Foreign Affairs Mark Brantley has confirmed a breakthrough in diplomatic relations with Canada that will make in much easier and cost effective for St. Kitts Nevis nationals to apply for Canadian visas.

Foreign Minister Mark Brantley told Freedom FM that under the new arrangement, nationals and persons living in the federation will no longer have to travel to the Canadian embassy in Barbados or Trinidad.

“It’s not only for St. Kitts Nevis nationals but for all applicants for Canadian visas living in the federation. As we know in 2014 Canada imposed visa requirements for our people meaning out privilege of traveling to Canada visa-free was revoked, and we have been engaging with them ever since on this. They announced biometrics requirements for everyone last year which meant that SKN nationals had to now travel at great expense to Trinidad for a visa, and later also to Barbados. This was not only for St. Kitts and Nevis, but all of the Americas, countries in Asia-Pacific etcetera that anyone coming to Canada would have their biometrics collected.

“We complained that even with an additional embassy it would still put a Canadian visa out of the reach of our people, and so we were very very pleased that they accepted the suggestion that they do an itinerant process of collecting biometrics. So we have now been formally advised that effective August 26th Canadian officials will be here for a week collecting biometrics for nationals and non-nationals who want a visa to go to Canada.

“They will have to apply online I’m advised, but they will not have to travel to Barbados or to Trinidad.”

Mr. Brantley said more information on the visit will soon be made available. He clarified that Canadian visas will not be granted during the visit, only the collection of the biometric data.

“They’ve promised that we’ll have additional information very shortly. We understand that the timing is short but certainly for those who already have an interview to go to Barbados and Trinidad, I’m sure they will be be accommodated in St. Kitts and Nevis, and for those now applying I’m sure that interviews will be quickly facilitated for the purpose of biometric data collection.

“So it’s not visas will be granted when they arrive here, but the data necessary for them to process the visas will be collected here so that individuals will not have to travel to the Embassies to give that data.”

This development is being hailed as a major accomplishment by Minister Brantley and Ministry of Foreign Affairs. Premier Brantley said he is hopeful this positive development is another step in the direction of St. Kitts and Nevis having its visa-free waiver eventually reinstated.

“I’ve always been optimistic. I have met at the highest levels of the Canadian government including the Foreign Minister. We met with both the former and present Immigration Minister and we’ve really had this as our number one bilateral issue with Canada. The truth is the situation with Canada described in 2014, which led them to impose this visa restriction on the people of St. Kitts and Nevis, that situation no longer exists and this is an argument we’ve made time and time again that those concerns have been met. Our due diligence processes for our Citizenship By Investment have been enhanced; what was is no more and we have said to them that the level of cooperation, the level of scrutiny the level of due diligence, the level of transparency that the system now has that really their concerns have been met.

“We understand that this was a coveted position that we held and that we lost it in 2014, and we lost it because there was breakdown in the diplomatic relations and a breakdown in trust, and so we have continued to try to rebuild that trust and I think we all know when trust is lost it takes time to rebuild but it hasn’t been easy, because in a very complex world there are a number of complex issues that countries have to deal with.

“Notwithstanding we have pressed the case we’ve engaged with Canada at every available forum and I think that this some fruits of that labor that we are now seeing coming, to the benefit of the people of St. Kitts and Nevis and for that I think we all ought to be very grateful.”

Mr. Brantley placed on record his congratulations to Canadian High Commissioner Sherry Tross and her team for their work in the matter.