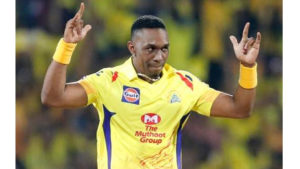 The West Indies all-rounder, who turned 37, got to the landmark with his third wicket of Shivam Mavi for nought as Chennai bowled out Kolkata for 167 in Abu Dhabi.

“I stuck to bowling the hard lengths and it worked,” Bravo said after he returned figures of 3-37 from his four overs for the Mahendra Singh Dhoni-led side.

It was Bravo’s third game for the three-time champions this season but the paceman said, “At my age it doesn’t make sense to play all games. When I get the opportunity, I back myself to do well”.

The paceman recently became the first player to take 500 T20 wickets while playing for Trinbago Knights Riders in the Caribbean Premier League.

Mumbai Indians paceman Lasith Malinga leads the IPL wicket-takers chart with 170 scalps from 122 games but the veteran Sri Lankan pulled out of this season due to family commitments.

Kolkata’s move to open with Rahul Tripathi in place of Sunil Narine proved key as the batsman smashed 81 off 51 deliveries including eight fours and three sixes.

Chennai faltered in their chase to manage just 157 for five in their 20 overs despite a valiant 50 by Australia’s Shane Watson and lost their fourth match out of six this season in the United Arab Emirates.

“We thought we will ease Sunny’s (Narine) pressure a little bit and send Rahul up,” said Kolkata skipper Dinesh Karthik.

“Our batting is very fluid. I started at three, I am batting at seven. That is the good thing. Over the years fluid line-ups have done better.”

Chennai also changed their batting order with Dhoni coming in at number four but was bowled by leg-spinner Varun Chakravarthy for 11.