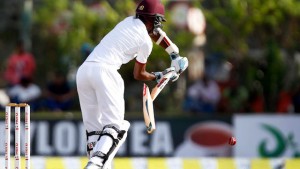 SYDNEY, Australia (CMC) — Opener Kraigg Brathwaite stroked an enterprising half-century but West Indies’ batting wobbled to give Australia the advantage on the opening day of the final Test here yesterday.

Opting to bat first, the Caribbean side finished the rain-hit day at the Sydney Cricket Ground on 207 for six, with the right-handed Brathwaite top-scoring with 85.

All-rounder Carlos Brathwaite, in his second Test, was unbeaten on a cameo run-a-ball 35 and was partnered by wicketkeeper Denesh Ramdin on 23.

He and Kraigg Brathwaite put on 91 for the second wicket following the early loss of Shai Hope for nine but the familiar middle-order collapse followed, with the Windies losing five wickets for 55 runs, to slump to 159 for six in the final session.

However, Carlos Brathwaite and Ramdin came together in a seventh wicket stand currently worth 48, to stall Australia’s progress and ensure West Indies were still afloat at the close.

Off-spinner Nathan Lyon has been the most successful bowler with two for 68.

West Indies once again had a dodgy start, losing the right-handed Hope in the morning’s fifth over, sparring at an outswinger from seamer Josh Hazlewood and nicking a catch behind.

Brathwaite and Bravo then countered with dominant stroke play as West Indies enjoyed one of their finest sessions of the series.

Emerging from a typical watch start, Brathwaite blossomed nicely to stroke ten fours in an innings lasting 174 balls while Bravo showed glimpses of his good form in a 95-ball inning which contained six fours.

Bravo twice drove pacer James Pattinson for exquisite off-side boundaries in the 11th over before aggressively pulling the same bowler through mid-on for another four in the right-armer’s next over.

Brathwaite was uncharacteristically audacious, twice coming down to Lyon and lifting the bowler back overhead for boundaries. He brought up his second half-century of the series and eighth in Tests in the third over before lunch when he punched Mitchell Marsh to the ropes at point and then followed up with a couple to square leg.

Unbeaten on 32 at lunch with West Indies on 92 for one, Bravo added just one after the resumption before falling in the third over at 104 for two, caught at by Usman Khawaja at backward square as he failed to keep down a pull off Pattinson.

West Indies then threatened to implode. They lost Marlon Samuels for four before rain forced an early tea break, and then lost a further three wickets following the resumption.

Samuels, with a wretched 31 runs from four innings in the series, steered Lyon to Hazlewood at point and immediately set off for a non-existent run. Both he and Brathwaite started and stopped before Samuels was left stranded by the throw to the keeper’s end.

On 115 for three at the tea break, West Indies looked to be flourishing afterward when Jermaine Blackwood pulled Lyon and drove Pattinson for boundaries in moving to ten.

An error in judgement caused his downfall, however, offering no stroke to one from Lyon that ripped back to hit off stump with West Indies on 131 for four.

Kraigg Brathwaite added 27 for the fifth wicket with Ramdin before he too perished at the hands of Lyon, gloving a cut to captain Steve Smith at first slip off one that bounced.

With one run added 15 balls later, captain Jason Holder was brilliantly caught low down by Joe Burns at forward short leg for one, off a firm leg-side push off left-arm spinner Steve O’Keefe.

Tottering, West Indies were rescued for the second straight Test by the authoritative Carlos Brathwaite who counter-attacked to pull the innings around.

The right-hander, who got a half-century on debut in the Melbourne second Test last week, blasted four fours and two sixes while Ramdin played a supporting role, facing 72 deliveries and counting two fours.

Brathwaite was off the mark in style, clearing the ropes back overhead with O’Keefe off the second ball he faced and then twice swept the same bowler behind square for boundaries in later overs.

In the day’s final over, he deposited O’Keefe several rows back and followed up with a full-blooded cut to the point boundary, as West Indies finished strongly.
Scoreboard