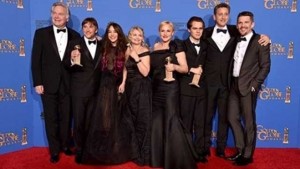 LOS ANGELES, United States (AFP) – Coming-of-age drama “Boyhood” emerged triumphant Sunday at the Golden Globes, Hollywood’s first major awards show, where celebrities vowed solidarity with France after the Paris attacks.
The film won three Globes including the coveted best drama prize and best director honors for Richard Linklater at the star-studded ceremony at the Beverly Hilton hotel in Los Angeles.
The pioneering movie — made over 12 years with the same cast of actors portraying a child’s growth to adulthood — also won a best supporting actress trophy for Patricia Arquette.
“This was a very personal film for me … and it means so much to us that people have seen it and responded to it in that personal way,” Linklater said.
Dark comedy “Birdman” — which had started the evening with the most nominations at seven — and “The Theory of Everything,” about world-famous scientist Stephen Hawking, each took home two awards.
“Birdman,” about a washed-up film actor trying to revive his career on stage, took best musical/comedy actor prize for Michael Keaton, and best screenplay for director Alejandro Gonzalez Inarritu.
“The Theory of Everything,” the moving story of Hawking’s descent into disability, won best drama actor honors for Britain’s Eddie Redmayne, as well as best original score.
The prize for best comedy/musical film went to “The Grand Budapest Hotel,” a stylish caper starring Ralph Fiennes, while Amy Adams won best actress in a musical/comedy for art fraud film “Big Eyes.”

Comic duo Tina Fey and Amy Poehler opened the three-hour show with a sharp monologue poking fun at the Sony Pictures hack and the firestorm over “The Interview,” a farce about killing North Korea’s leader.

The hosts joked that the evening was to celebrate “all the movies that North Korea was okay with.”
The evening took a more serious turn when the head of the Hollywood Foreign Press Association — which hands out the Globes — brought the audience to its feet with a pledge to support freedom of expression in the wake of both the Sony hack and the French attacks.
“Together we will stand united against anyone who will repress free speech, anywhere, from North Korea to Paris,” said HFPA chief Theo Kingma.
A short time later, Oscar-winning actor Jared Leto also paid a moving tribute, even speaking French: “On vous aime. Je suis Charlie.” (“We love you. I am Charlie”)
And George Clooney, upon accepting the Cecil B. DeMille award — an honorary Golden Globe for outstanding contributions to the world of entertainment — also voiced his support, saying: “Je suis Charlie.”

On the red carpet, several stars including Clooney and his wife Amal, Helen Mirren and Kathy Bates displayed the “Je Suis Charlie” slogan, which has become a rallying cry in the wake of the deadly gun attack on French satirical weekly Charlie Hebdo.

On the small screen, online retail giant Amazon scored its first ever Golden Globes for best comedy series “Transparent” — a breakthrough in its bid to catch up with streaming pioneer Netflix.
The series, starring Globes winner Jeffrey Tambor, tells the story of a man who has transitioned to become a woman and is working out the thorny details of telling his family.
“This is dedicated to too many trans people that died too young,” said series creator Jill Soloway.
“Maybe we’ll be able to teach the world something about authenticity and truth and love.”
Netflix also took home a Globe for “House of Cards” star Kevin Spacey, named best actor in a television drama.
Showtime’s “The Affair” won two Globes for best drama series and best actress Ruth Wilson.

Unlike the Oscars, which are voted on by some 6,000 industry members of the Academy of Motion Picture Arts and Sciences, the Globes are selected by fewer than 100 journalists from the Hollywood Foreign Press Association.

But a Globes win can still provide a huge boost for an Oscars campaign. Oscar nominations will be announced on Thursday. The Academy Awards will then be held on February 22.