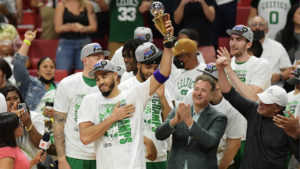 The Boston Celtics held on for dear life against the relentless Miami Heat in Game 7 and survived.

Jayson Tatum, Jaylen Brown and Marcus Smart — the core of a team that had lost two previous chances together to win the Eastern Conference finals — combined for 74 points in a 100-96 victory to advance to the NBA Finals against the Golden State Warriors. Boston won for the third time in four games in Miami.

“The road that we took to get here, not a lot of people believed in us,” Tatum said on the court after slaying Brooklyn, Milwaukee and Miami in successive rounds. “We took the toughest route, and it worked out.”

“We stayed with it. We believed in each other. We made a commitment on the defensive end,” Horford, who reached the Finals for the first time in 141 playoff games, said as he accepted his team’s trophy. “That was the biggest thing, defending, and that was going to be our identity — and that’s what’s carried us this far.”

Game 1 of the NBA Finals is scheduled for Thursday in San Francisco at 9 p.m. ET (ABC).

Jimmy Butler scored 35 points, playing all 48 minutes for the Heat in defeat. Bam Adebayo added 25 points. Miami’s two bright stars shot 56% from the field. Their teammates had 36 points on 28% shooting.

Once the Celtics took a 98-85 lead with 3:35 remaining, the Heat rallied on an 11-0 run, and Butler saw a wide-open transition 3-point attempt that would have given them their first lead with 16 seconds left, but he fired it off the front rim. Smart connected on a pair of free throws on the other end to prevent a collapse.

The Celtics pushed the pace in the first quarter and played lockdown defense, taking a 32-17 advantage with the same execution that doused the Heat to start Game 4. Six Celtics scored in the first six minutes. They also scored 13 points in transition on one end and held Miami to 35% shooting from the field (1-7 3P). The 9-1 lead Boston established in the opening three minutes sustained the Celtics for the entire game.

As in Game 6, Butler kept Miami within striking distance whenever Boston threatened to blow the game open. He made all five of his shots and took 10 free throws in the second quarter. His 3-pointer with 1:26 left before halftime cut the deficit to 53-44 and gave him 24 points on 8-of-11 shooting. The rest of the Heat had 20 points on 8-of-26 shooting at the time. Four Kyle Lowry free throws on two light fouls gave Miami 19 attempts in the quarter and capped an 11-2 run to close the second. Boston clung to a 55-49 halftime lead.

The Celtics pushed the lead back to 14 midway through the third quarter — aided by a negated Max Strus 3-pointer for stepping out of bounds — but again the Heat responded. Boston missed consecutive layups, and Victor Oladipo punctuated a 7-0 run to bring Miami within 72-65. That gap remained at quarter’s end. Boston had 19 points on 7-of-9 shooting in transition and was otherwise shooting 38% entering the fourth.

The Heat countered with four transition points of their own to start the final quarter — on an Adebayo dunk and another Butler layup — cutting the score to 82-79 and forcing a Celtics timeout. It was as close as Miami had been since they fell behind 4-0 in the opening 78 seconds. Boston had the final say, unleashing a 16-6 run over the next 7 1/2 minutes to put Miami just out of reach. Tatum scored seven of the 16 points.

The Heat did not go quietly. Their 11-0 run shocked the Celtics, who could not manufacture a basket in the final 4:28. Butler’s decision to pull up from 3 in transition and not attack Horford for a potential game-tying layup will be debated in Miami for some time. The Heat did not see another chance to tie the game, and Strus missed two more 3-pointers in the final 7.6 seconds that would have wrenched Boston’s guts again.

Instead, the Celtics, led by Tatum, their 24-year-old rising superstar, held on to earn the franchise’s first Finals appearance since 2010, opposite Stephen Curry and the veteran three-time champion Warriors.