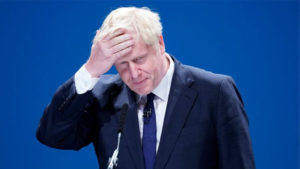 LONDON — Boris Johnson has refused to apologize for articles he has written referring to black people as “piccaninnies” with “watermelon smiles” and calling gay people “bumboys,” saying his comments were “wholly satirical.”

The frontrunner to replace Theresa May as Britain’s prime minister told Sky News that his comments had been “wrenched out of context.”

“I think if you look at each of every one of those articles … the quotations have been wrenched out of context in some cases to mean the opposite of what I intended,” Johnson said, adding that the comments had been made in “a wholly satirical way.”

Johnson was asked about a Telegraph column from 2002 in which he referred to a visit to Africa by the UK’s prime minister at the time, Tony Blair.

“It is said that the Queen has come to love the Commonwealth, partly because it supplies her with regular cheering crowds of flag-waving piccaninnies,” he wrote, later referring to African people as having “watermelon smiles.”

Johnson’s record of homophobic comments was also raised by Sky.

As Business Insider previously revealed, in a 1998 Telegraph column about the resignation of the former Labour Business Secretary Peter Mandelson, who is gay, from the Labour government, Johnson said the announcement would lead to the blubbing of “tank-topped bumboys” in “the Ministry of Sound” nightclub, and “the soft-lit Soho drinking clubs frequented by Mandy and his pals.”

He added that Mandelson’s departure would cause the “lipstick” to come away from Blair’s government.

Writing in The Spectator in 2000, Johnson also attacked what he called “Labour’s appalling agenda, encouraging the teaching of homosexuality in schools, and all the rest of it.”

In the 2001 book “Friends, Voters, Countrymen,” Johnson compared gay marriage to bestiality, writing, “If gay marriage was OK — and I was uncertain on the issue — then I saw no reason in principle why a union should not be consecrated between three men, as well as two men, or indeed three men and a dog.”

In a separate Telegraph column, Johnson also bewailed attempts to increase equality at the BBC for gay people.

Johnson was also questioned about his article last year, in which he referred to Muslim women as “letterboxes.”

The former foreign secretary has previously refused to apologize for the comments, and this week he dropped a pledge made earlier this month to hold an inquiry into Islamophobia in the Conservative Party.

Labour said Johnson’s comments showed he was unfit to be Britain’s next prime minister.

“Boris Johnson’s defense of his racist and homophobic comments is despicable and disappointing. At a time when racist and homophobic hate crime is rising in our society, his refusal to apologize for his disgusting remarks legitimizes and fuels this prejudice,” Dawn Butler, Labour’s shadow women and equalities secretary, said.

“His words have dangerous consequences. After his comparison between Muslim women and ‘bank robbers’ and ‘letterboxes’ was directly linked to a rise in hate crime targeting Muslim women, there can be no doubt that his words put marginalized people in our country at risk.

“And his words today will embolden the Islamophobes who, according to new polling, make up nearly half of Conservative Party members. They have been given a free pass by Boris Johnson breaking his promise to hold an independent inquiry into Tory Islamophobia.

“He is not fit to be prime minister of our country.”