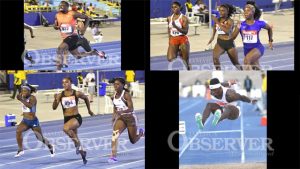 Olympic champions Usain Bolt and Shelly-Ann Fraser-Pryce safely navigated their way into the semi-finals of the 100m, while Clive Pullen stole the show capturing the triple jump with 16.90m and achieved the Olympic qualifying mark on day one of the Supreme Ventures Senior National Championships at the National Stadium last night.

Pullen, 21, a former Kingston College student now attending the University of Arkansas, soared to 16.90m with a wind of 1.9 mps and was the only jumper who surpassed the qualifying mark of 16.85m. Damon McLean was second with 16.46, while Wilbert Walker finished third with 16.42m.

Pullen, who punched his ticket to the Rio Olympics after improving on his personal best of 16.78m, said the distance didn’t surprise him. “I have been jumping well all season, winning three of four NCAA titles and has been improving all season long and I expected a big jump,” said an elated Pullen.

Meanwhile, there was drama in the men’s 100m in which former world record holder Asafa Powell stumbled badly out of the blocks, but luckily for him, the race was called back quickly by starter Ludlow Watts. There appeared to be some issue with Powell’s block.

At the second time of asking, Powell wasn’t the best away, but recovered well and took the lead before easing down, but was relegated to third in 10.17 seconds. Jevaughn Minzie won the race in 10.15 seconds with Senoj-Jay Givans second with 10.16 seconds into a headwind of -1.1 mps.

Bolt won the final heat in 10.15 seconds, but not before the promising Julian Forte was disqualified for false-starting. It was anxious moments as Forte was drawn next to Bolt, and patrons held their breath for the outcome. Everton Clarke finished second in 10.16 just ahead of veteran Michael Frater in 10.31.

An impressive-looking Nickel Ashmeade won his quarter-final in 10.07 seconds easing down into a wind of 0.0 mps. Warren Weir was second in 10.17, while Yohan Blake captured heat two in 10.26 seconds into a head wind of -1.0. Kemar Bailey-Cole was second with the same time with Tyquendo Tracey third in 10.29.

Christana Williams, who is expected to make some noise in the women’s 100m, produced a good-looking 11.20 running into a headwind of -3.0 mps. She was the fastest of the day and pulled Audra Segree to 11.36 seconds.

Double Olympic 100m champion Fraser-Pryce eased into the semi-final with a relaxed 11.38 clocking from heat two into a headwind of -1.3 mps. Remona Burchell was second in 11.59 with Natasha Morrison third in 11.61 seconds.

Jamaica’s Janieve Russell, who is one of the island’s main hopes for gold at the Rio Olympics, was absent from the women’s 400m hurdles heats.Russell, who has the second fastest time in the world with 53.96 seconds and has been dominating the Diamond League circuit, is said to be injured.

However, a medical exemption was provided which keeps her in line for further selection once she proves her fitness. The heat was won by Leah Nugent in 55.52 seconds, while Kaliese Spencer easily won heat two in 56.13 seconds. Ristananna Tracey cruised to 55.96 in heat three ahead of Clayton Russell with 56.31 seconds.

In the men’s 400m hurdles, Jaheel Hyde and Isa Phillips were quickest into the final as both clocked 49.31 seconds in heat two. Marvin Williams was third in a personal best of 49.65. Annsert Whyte eased to 49.37 from heat three ahead of Romel Lewis in 49.66. Robert Cato took heat one in 49.83 seconds.

The championship continues today with 12 finals culminating with the 100m events at 9:15 pm. Action of the second day starts at 5:00 pm with the men’s pole vault final.