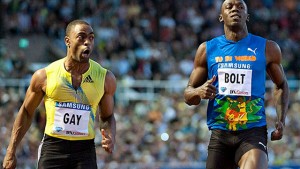 LONDON (AP) — Usain Bolt believes Tyson Gay should have been thrown out of the sport for doping, calling his American rival’s reduced ban for cooperating with investigators “the stupidest thing I’ve ever heard.”

Gay received a backdated one-year suspension last year after testing positive for a steroid at the 2013 US championships. He was given the reduced penalty because he provided evidence to the US Anti-Doping Agency that led to an eight-year ban for his former coach, Jon Drummond.

Bolt, the Jamaican who has won six Olympic gold medals and holds the world record in the 100 and 200 meters, said he was “really upset” with the decision to let Gay cut a deal.

“He got a year just because he talked to the authorities about how it was done and who helped him,” Bolt said in an interview with Runner’s World magazine published Friday in The Times of London newspaper. “That sends the wrong message: ‘If you do it and get caught, just tell us all you know and we’ll lower your ban.'”
“It’s the stupidest thing I’ve ever heard,” he added. “The message should be: ‘If you cheat you’re going to be kicked out of the sport.'”

Gay, who won the 100, 200 and 4×100 relay at the 2007 world championships, returned to competition after his suspension last summer and ran faster times than Bolt. He and Bolt are expected to run against each other at the worlds in August for the first time since the American’s return.

“I’m not looking forward to competing against Tyson,” Bolt said. “It really bothers me. … I respected him so much over the years. He was a competitor, kept me on my toes and he pushed me to always do my best.

“Then to find out that he was on drugs — it’s a bit like I think parents must feel when they have a kid who does something bad and lets them down. I feel like he let me down and let the sport down.”

Gay’s results dating back to 2012 were erased, including his silver medal in the 4×100 relay at the London Olympics.

“You have to drive fear into athletes, to make them think about the consequences of their actions,” Bolt said. “If they’re getting an easy penalty why would they care?”