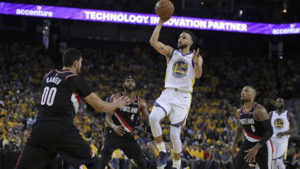 OAKLAND, Calif. — Damian Lillard used a screen to get Stephen Curry switched on to him. He dribbled in place and prepared to go on the attack. And then instantly, Draymond Green emerged and sprinted in Lillard’s direction.

Lillard’s plan was immediately halted, and now his focus shifted to finding a passing angle.

He’s seen this before. The schemes are familiar, the coverages are comparably suffocating, the bodies are aplenty and all the attention is on him.

Last year in the playoffs, the New Orleans Pelicans trapped and swarmed him at every turn, forcing Lillard to give up the ball and his teammates took shots they weren’t comfortable shooting. The result: a first-round sweep of the Trail Blazers.

On Tuesday in Game 1 of the Western Conference finals, the Golden State Warriors implemented and executed a similar defensive tactic, corralling Lillard and CJ McCollum in order to get the ball out of their hands. And when the pair did get up shots, most of them were forced.

Steph Curry did what he wanted against the Blazers on Tuesday night, scoring 36 points. (AP)
More
Lillard scored 19 points on 4-of-12 shooting, and McCollum added 17 points on 7-of-19 shooting as the Warriors rolled 116-94 at Oracle Arena.

If the Trail Blazers intend to make this a series, swift modifications on the defensive and offensive ends are in order for Game 2 on Thursday.

“Their defense was similar to New Orleans,” Lillard told Yahoo Sports. “They were just aggressive on everything. If I was iso, they were sending bodies. If I was coming off pindowns, they were sending bodies, pick-and-rolls — definitely trapping. Bringing it up the court … one time, Draymond just ran at the ball and somebody was already guarding me. It’s definitely similar to New Orleans.”

The main difference between the defensive personnel of Golden State and New Orleans is that the defending champs have more wing defenders, leading McCollum to garner the same attention.

“Golden State is better than New Orleans defensively,” McCollum told Yahoo Sports. “They’re more mature, more experienced, better length on the perimeter and they have the ultimate helper in Draymond. He always helps. He’s the one that lives in the paint. He’s the free safety. He’s the roamer.”

It is anticipated that Lillard will work off the ball more as the series progresses.

Green understands the likelihood of the Trail Blazers’ backcourt having another awful shooting night is doubtful, but the Warriors will proceed with the same defensive strategy until they’re forced to adjust.

“Obviously, they are the focal point of our defensive game plan, and I think we just did a really good job of sticking to that game plan,” Green said after posting 12 points, 10 rebounds, five assists and three blocks. “You know, you can play that same defense and they can really get it going. We have to make sure we stay locked in on the details moving forward and understand that Damian is not going to have the game that he had the rest of the series, and neither is CJ, but we have to do whatever we can as a team to try to continue to force them to have those type of games.”

With his team down 1-0, Lillard — who committed a game-high seven turnovers — didn’t seem too concerned with his overall offensive performance.

“I was able to score points,” Lillard told Yahoo Sports. “I had 19 points and I hardly got any attempts up. Versus New Orleans, I was having 10 points and 12 points and stuff like that. It was similar, but it’s something that we can adjust to. We’re going to figure it out.”

Portland also has to figure out some continuity on the other side of the ball.

In the middle of the second quarter, Steph Curry received a pick from Green near the visitors’ bench.

Green smacked Portland Trail Blazers guard Seth Curry with a rock-like stationary screen. Seth tried his best to fight over it to no avail. He was stuck. Assistance from his closest teammate was desperately needed.

However, Blazers big man Enes Kanter never left the painted area, and the two-time MVP took one dribble to his right following the screen and knocked down one of his nine triples on the evening.

The sequence repeated itself over and over throughout the contest. The Trail Blazers’ bigs — whether it was Kanter or Zach Collins — continued to sag back on picks and allow the game’s all-time greatest shooter to walk into uncontested 3-pointers.

Curry led all scorers with 36 points, was 9-of-15 from long distance, pulled down six boards and distributed seven assists in 35 minutes.

“We’ve played against Kanter before,” Curry said. “And there are certain looks you can get.”

Portland finished in the middle of the pack during the regular season at No. 16 with a defensive rating of 111.07. And for most of the season, coach Terry Stotts has directed his bigs to avoid coming up on pick-and-roll coverages.

“That was very poor execution defensively on our part,”Lillard said at his postgame presser, “just having our bigs back that far. Understanding the team we are playing against, they are not going to shoot midrange jumpers and try to attack the rim. If they see the opportunity to shoot a three, they are going to tell you. They shoot it at a high clip. We’ve got to bring our guys up and run them off the line, and tonight, we were, you know, they were setting solid screens and coming off shooting practice shots. You know, that’s the last thing we need if we want to have any chance to beat this team.”

When asked about his defensive approach, Stotts placed most of the blame on how his team played on the other end of the court.

Lillard explained how he plans to turn things around offensively Thursday.

“I think taking better care of the ball and making plays to make them pay for [trapping me],” he told Yahoo Sports. “If you make them pay, and now they got to loosen up. They got to worry about something else. So, I got to continue to trust the play and find guys on the weak side, find guys in the paint, make them pay and then try to force them to loosen up that way.”

It’s on Stotts to make the proper adjustments. If the bigs continue to sag, if Lillard and McCollum aren’t placed in better positions to score, this will be a very short series.