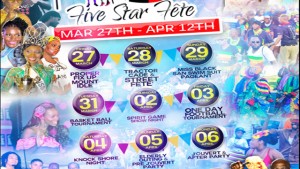 Sandy Point, St. Kitts (16th January, 2015) With less than eighty one days to the start of the federation’s largest community festival, organizers have promised an action packed lineup as the town of Sandy Point prepares to celebrate its fifth annual BLACK SAN’ festival. Dubbed ‘5Star Fete’, festival chairman Amos Francis explained that not only is this year’s theme catchy but it gives a solid commitment to the festival’s patrons, partners and sponsors that parent group SPIRIT, is dedicated to delivering a quality product that all would appreciate.

“It is through the continued support of our partners and patrons that we are able to move into our fifth year. We believe that it is as a result of our emphasis on family and community togetherness that we continue to receive nothing but strong support as businesses recognize Black San’ as an effective means of giving back to communities’’. The 2015 festival is set to run from March 27 to Aprril 12 and is packed with the signature events that Black San’ has become known for, as well as new events to excite and include all!

‘Proper FixUp’ comes alive from the Friday-night warm up and will set the stage for the Saturday Tractorcade and Street Feteon March 28.The following week kicks off with an early dose of sizzle as Sunday March 29 is slated for the Ms. BLACKSAN’ Swimsuit Pageant, and rolls right into a fiery one-day basketball hoops tournament on the30th, showcasing some of SPABA’s and SKABA’s most talented players! The crowd-drawing SPIRIT Game Show-April 2nd and the annual Easter Football classic on April 3rd will draw the curtains on that week and set the stage for Saturday’s Knockshore Night on April 4th– poised to be one of the biggest Black San’ events and guarantees to deliver the high octane entertainment tha tmany have grown to expect! But this is just a prelude to an event-stacked weekend! The next few days will see the Elderly Appreciation on Sunday 5th, followed by the all-night Pre-J’ouvert Warm-up.

The action continues through the early hours of the morning and leads into the J’ouvert Jump-up and WetDown Fete on April 6. Then April 10 will see the return of boxing and kick boxing to Sandy Point Hard Court as fighters engage in hand to hand combat. The festival’s final weekend wraps up with the Last Lap Fete on Saturday 11th and bringing down the curtains on this year’s festival on Sunday, April 12 in grand fashion, is the inaugural BLACK SAN’ BALL.”This year’s festival builds on last year’s successes and patrons can expect the same safe, clean fun with much more excitement!” said Francis.

There are still lots of opportunities for new sponsors, private donors and community groups to come on-board. Be among the first to see the new promotional material for the festival byvisiting www.blacksanbangalang.com and check out the news, more about SPIRIT and this year’s sponsors. Or better yet, be ahead of the game and get involved by searching ‘Sandy Point SPIRIT’ on Facebookand Youtube or ‘BlackSanBangALang’ via Instagram or Twitter, and let us know what you expect for thisyear’s festival.