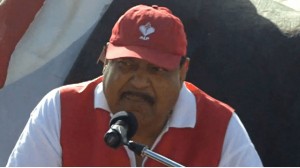 Senior Minister in the Antigua & Barbuda (ABLP) administration, Lester Bird said government needs to set a target to build 3,000 additional hotel rooms, but should include at least two high-end properties.

The former prime minister suggested that Antigua & Barbuda should try to attract a Ritz Carlton, Marriott or Hyatt or similar luxury property.

Bird made his comments at yesterday’s budget debate, and admitted that in the past he had been chided “for not dealing with smaller hotels,” because the average revenue generated per visitor is greater for larger established hotels

Bird, who was also a former minister of tourism, said 70 per cent of stay-over expenditure flows through the hotel sector and the time has come to diversify the tourism product and provide greater opportunities for spending by the country’s visitors.

He said there is an urgent need to focus the development of the sector and rebrand Antigua & Barbuda as a first class tourism destination.

Bird told the Parliament that it was time to implement programmes that will remove destination fatigue and replace them with a product that says dynamism and excitement.

Meanwhile, Bird said an investment in the Cedar Valley Golf Course would revitalise the tourism industry. He is encouraging government to sell its majority shares in the golf course.

The senior minister said the government’s 70 per cent share in the Cedar Valley property makes it difficult to get loans to upgrade the facility, which has 56 acres of land available for development. Bird said the golf course can become a world class golfing spot.

“The local banks have flatly refused to lend; this is unacceptable despite the fact the project’s plans are all viable,” Bird said.

The upgrade would include a new US $2 million clubhouse and the construction of a 50-room boutique hotel.

According to Bird, the 147 acres of land was erroneously estimated to be worth $33 million dollars when in fact the true value is $50 million.