Bermuda shuts down as Nicole looms 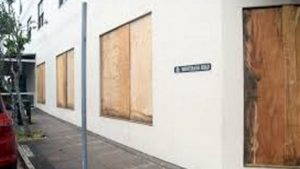 Getting ready for Hurricane Nicole

HAMILTON, Bermuda (CMC) — Bermuda came to a virtual shutdown on Wednesday as strengthening Hurricane Nicole, now packing maximum sustained winds of 110 miles per hour (mph), bore down on the island ahead of a likely direct hit on Thursday.

Shutters were being locked down, plywood was going up on buildings and sandbags were being laid out as the island made its final preparations for the storm.

Most businesses boarded up and closed at lunch-time, airlines cancelled flights while schools also closed and will not reopen until Monday.

Director of the Bermuda Weather Service (BWS), Kimberly Zuill, said that Bermuda can expect tropical-storm-force winds for up to 26 hours with hurricane-force winds for nine of those.

But one resident, Jack Kripl, said he was confident that Bermuda would weather the storm.

“People are well prepared. Bermuda should be fine,” he said.

“But you never know what might happen, a tree could still crash through your window at any point.”

Former firefighter Shawn Grant, now a floor manager at a Hamilton store, said a “great number” of generators had been bought and a steady stream of people was buying essential storm items.

The Miami-based National Hurricane Centre (NHC) said in its 5.00 pm (local time) bulletin said that the large eye of Nicole — a Category 2 storm — was moving northward towards Bermuda at 10 mph and conditions were expected to deteriorate on the island on Wednesday evening.

Nicole, the 14th named storm of the Atlantic hurricane season, was 240 miles south-southwest of Bermuda.

“Some slight strengthening is possible tonight or early Thursday, and Nicole is forecast to be at or near major hurricane strength when it approaches Bermuda,” the NHC said, adding that the storm is expected to dump between four and eight inches of rain on the island where rainfall is already running at 11 inches above normal for the year.

The Causeway, a low-lying bridge linking the east end — where the airport is situated — with the rest of Bermuda, will close at 11:00 pm on Wednesday and is expected to remain closed for around 18 hours.

Four people were swept to their deaths while trying to drive across the bridge at the height of the storm when Hurricane Fabian smashed into the island in 2003.

Nicole formed as a tropical storm south of Bermuda last Tuesday, did a U-turn on Sunday night and headed towards Bermuda.

Nicole had meandered erratically while intensifying to a Category 2 hurricane with 105 miles per hour winds last Friday while far from land.

It began to weaken as it drifted further south but has roared back to life.

Bermuda’s only brush with a storm this season came last month when Tropical Storm Karl dumped around four inches of rain on the island but it caused no serious damage.