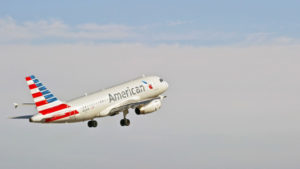 More than 300 passengers were forced to sleep on the floor of the L.F. Wade International Airport after a London-bound flight from Florida was forced to divert to Bermuda, local and international media have reported.

A replacement American Airlines (AA) plane eventually flew the passengers to their original destination on Monday night more than 21 hours after they arrived here.

An AA spokesman confirmed that American Airlines flight 38 from Miami to London had to be diverted to Bermuda after a possible mechanical issue.

“We never want to disrupt our customers’ travel plans, and we apologise for the trouble this has caused.”

A Ministry of Health spokeswoman said the airline found accommodation at a local hotel for crew members.

AA’s Flight 38, which left Miami late on Sunday night, had to turn back several hours into the journey with apparent mechanical problems.

A spokesman for airport operator Skyport confirmed that the 777 aircraft touched down in Bermuda shortly after midnight, but safety regulations meant it could not leave until Monday evening. The relief flight, scheduled for an 8.00 pm take-off, left at 9.30 pm (local time), according to airport departure times.

“At 12.40 a.m. this morning [Monday], American Airlines flight 38 en route from Miami, Florida to London Heathrow, arrived at the L.F. Wade International Airport with 317 persons on board having diverted to the island due to a mechanical issue,” the spokesman said.

“The aircraft, a Boeing 777-300, landed safely and without incident. All passengers and crew deplaned the aircraft at 1.10 a.m. and were housed in the international departures lounge of the new terminal as American Airlines officials advised that they were unable to find a sufficient number of available hotel rooms to accommodate all persons from the flight.

“The airline made light refreshments available for passengers before having meal options catered by late morning. The airport duty-free and retail shops, the bar and restaurant facility and the Prime class VIP Lounge with shower facilities were all open and available to passengers during the day.”

According to UK news reports, some passengers claimed they were “abandoned” — and that facilities at the airport were not satisfactory.

One report quoted a passenger, Jonathan Lo, who said that the pilot explained that there was an indication that the plane’s electronics were overheating.

“A little later on it was backed up by a further announcement to say that, actually, they could smell smoke in the aircraft cockpit. All was going quite smoothly until we got into the terminal,” he added.

Lo said passengers waited for more than three hours until their first update on the situation, and it only became clear they would need to sleep at the airport at about 5 a.m. local time when airport staff provided them with blankets and pillows taken from the aircraft itself.

Another passenger, Danny Wells, was quoted in the UK as saying “we have had to take an extra two days’ holiday from work as we were due to work this morning but will not be able to work tomorrow either.

“We have a family house sitting, and both have now had to take the day off tomorrow as well as they are looking after animals. There are rows of people asleep on the floor, the lights have been on almost all night and everyone is freezing because the air con is on so they had to get everyone’s blanket from the plane.”

A spokeswoman for the Ministry of Health said that officials were at the airport to provide COVID-19 tests for anyone who wanted to leave the facility.

“In this instance, the decision for arranging accommodations is not one to be made by the Ministry of Health. The airline must organise hotel rooms for its passengers in such situations. At no time did American Airlines communicate a desire to have its passengers landed to transfer them to a hotel, even if only for the day.

“The Port Health team at the Ministry of Health stood ready to administer supervised antigen tests for all passengers – as we have done for passengers on previous diverted flights. However, the airline did not make that decision.

“The Ministry of Health’s compliance team also stood by in case a decision was made to allow the passengers to leave the building and stretch their legs in a designated area. Again, no decision was made. We note American’s crew were provided accommodation at a local hotel by the airline.

“Bermuda’s COVID-19 regulations did not in any way prevent American Airlines from taking steps to better accommodate its passengers today,” the spokesman added