Batsmen need to look in the mirror, says skipper Holder 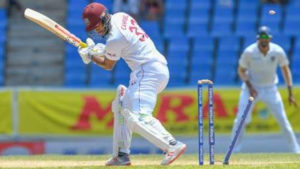 Set an improbable 419 runs for victory on the penultimate day at the Vivian Richards Cricket Stadium, West Indies crumbled in quick time on a flat pitch for exactly 100 — their sixth lowest total against India.

Only number nine Kemar Roach, with a cavalier 31-ball 38 showed any resistance and he was just one of three batsmen in double figures.

“Each batter has got to look at themselves seriously in the mirror,” Holder told the media following the loss.

“We’ve just got to find solutions. I think more often than not we’ve been gifting our wickets, not letting the opposition work for our wickets and I think that’s one area we can definitely [focus] on.

“If we are going to get out, we’ve got to make the opposition work hard for our wickets. I think we can go through the dismissals in this Test match and there were quite a few soft dismissals.”

He continued: “Our batters definitely did not come to the party in this game. We fell short by quite a few runs. I felt the wicket has been a very good wicket.

“The initial phase with the new ball was probably the hardest point that a batsman should fear, I think after that it gets pretty easy. We just didn’t get enough runs in this game.”

West Indies were ripped to shreds by the superb Jasprit Bumrah, who produced an exhibition of high class swing bowling to finish with five wickets for seven runs from eight overs.

In a torrid 45-ball period before tea, Bumrah sent back openers Kraigg Brathwaite (one) and John Campbell (7), before adding Darren Bravo (2) to his list of casualties, as West Indies slumped to 15 for five at the interval.

“On a day like today, he proved difficult. He bowled some magic balls and he got quite a few of our batsmen out with some very good balls,” Holder said of Bumrah.

“Having said that we’ve just got to find ways to negate it. He’s a quality bowler, yes, but there are definitely solutions out there.”

He added: “They bowled well. Bumrah bowled an exceptional spell and Ishant was very supportive, as well as Shami. It’s just one of those spells in Test cricket, where the opposition gets on top of you and stays on top.

“We’ve seen it happen on so many different occasions around the world. These things do happen in Test cricket but it’s just a matter for it not to happen often.”

The defeat for West Indies was their 13th to India in their last 22 meetings, during which time they have failed to notch a single win.

And with a short turnaround before the second Test bowls off at Sabina Park in Kingston next Friday, Holder said it was important the team put the loss behind them quickly.

“It (defeat) definitely doesn’t dent my confidence and I think the group should be uplifting themselves,” he stressed.

“We’ve got a lot to be disappointed about. Obviously we didn’t perform as well as we would like. But there’s no point dropping our heads — that’s not the solution. We’ve got to find a way to bring ourselves out of this defeat, try to rally around one another and try to come back a lot better in Jamaica.”

He added: “It’s just a matter for us to dig a little deeper. We’ve got to fight harder initially up front in our innings to give ourselves a really fair chance of succeeding.