Barcelona through to Cup semis as Coutinho makes debut 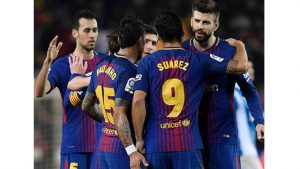 Lionel Messi scored what proved to be the winner as Barcelona beat Espanyol 2-0 to reach the Copa del Rey semi-finals on Thursday in a game that saw Philippe Coutinho make his long-awaited debut.

Messi had missed a penalty in that match as the leaders of La Liga were beaten for the first time since August, but they did enough on Thursday to join Sevilla, Valencia and Leganes in Friday’s draw for the last four.

Coutinho was named on the bench for the first time since his 160 million-euro ($192 million) transfer from Liverpool earlier this month.

The 25-year-old Brazilian was introduced midway through the second half in place of Andres Iniesta, entering the Camp Nou pitch to a huge roar from the home crowd.

By that point Ernesto Valverde’s men had already turned the tie around against the club for whom Coutinho played on loan from Inter Milan in 2012.

Suarez headed in Aleix Vidal’s cross from the right at the back post in the ninth minute to open the scoring on the night and level the tie on aggregate.

Messi scored in the 25th minute, his shot beating goalkeeper Pau Lopez with the help of a sizeable deflection off Brazilian defender Naldo.

It was Barcelona’s 4,000th goal at the Camp Nou in an official game.

Barcelona, who have won the Copa del Rey in the last three seasons, had a host of chances to put the tie to bed but saw out the victory, with Espanyol unable to get the away goal that would have swung the tie.

On Wednesday, Real Madrid were eliminated by Leganes, a 2-1 defeat at the Santiago Bernabeu seeing them go out on away goals and increasing the pressure further on coach Zinedine Zidane.

Valencia beat Alaves on penalties while Sevilla beat Atletico Madrid 3-1 on Tuesday for a 5-1 aggregate success.