Barbados govt says no IMF programme to turn economy around 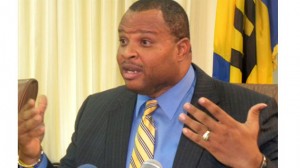 BRIDGETOWN, Barbados (CMC) – The Barbados government Monday said it would not seek assistance from the International Monetary Fund (IMF) to help turn around an ailing economy, insisting that the fiscal programme it has embarked upon is working, despite having laid off thousands of public workers.

“What we have to do is to do the things that would help us achieve the (economic) growth,” Finance and Economic Minister Chris Sinckler told a news conference.

“Based on what we are seeing we know growth will return,” he said, telling reporters that the government was working to achieve the two per cent economic growth as predicted by the Central Bank of Barbados.

Sinckler said that in relation to the discussion pushed by the private sector for the Freundel Stuart government to contemplate a programme with the IMF, “we have said what our position is.

“We are not contemplating any IMF programme at this stage, we do not think it is necessary, we believe that Barbadians can achieve the objectives of the programme that we have set ourselves.

“It is not going to be easy or painless, but I know the alternatives which some people are clamouring for will be far worse than they may suspect,” he told reporters.

“We are measuring the situation and we feel at this stage that (IMF programme) is not required at this stage,” he added.

Last year, the government announced the plan to cut public service jobs in a bid to save BDS$143 million (One BDS dollar = US$0.50 cents). Government said it would also institute a “strict programme of attrition” across the central public service, filling posts only where it is absolutely unavoidable, over the next five years, ending 2018-2019.

On Monday he told reporters that the government was also looking at ways of reducing the burden of taxes on citizens and was exploring the possibility of broadening the tax base.