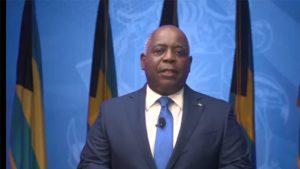 Bahamas Prime Minister Philip Davis is encouraging all women, including those who are married, to make complaints to the police, if they are victims of sexual violence.

“What I say to any woman, married or not, if they are aggrieved by being assaulted by anyone, they should report it to the police. The law takes into account the separation of persons who would have had a marriage.

“Any assault on a woman, be it whether you call it rape, grievous harm or otherwise, the law should take its course. Report those incidents to the police,” Davis told reporters following the release of a new study by the University of The Bahamas that explored the prevalence of spousal rape and assaults within marriages.

The study, undertaken during the period of September and October this year, collected data from 1,700 women with 455 being married. They were asked about their experiences of rape and sexual abuse in their current relationships.

The study sought to quantify the extent of the issue against the backdrop that there has been increased outcry for the criminalisation of rape within marriage since the offence does not exist in Bahamian law.

It found that one in 12 or an estimated 4,000 married women have been raped by their husbands, suggesting also that an estimated 6,000 wives claimed being victims of sexual abuse.

The Bahamas Crisis Centre estimates that three out of every four victims of sexual violence do not report the matter to police.

The Royal Bahamas Police Force said 1,811 sexual offenses – rape, attempted rape, and unlawful sexual intercourse – were reported between January 1, 2010, and May 31, 2021. There were 872 reports of rape during that period, making it the most reported sexual offense.

Under the law, there can be no rape in a marriage in The Bahamas.

The Sexual Offences Act does include an offense called sexual assault by a spouse, but only if the couple has a decree nisi of divorce; a decree of judicial separation; a separation agreement; or an order of a court for the person not to molest or cohabit with his spouse.

The Davis administration has drafted a bill that will criminalize marital rape. The proposed Sexual Offences (Amendment) Act seeks to criminalise marital rape and redefine what consent is.

Human Rights Bahamas (HRB), commenting on the University of the Barbados study findings, said it was not at all surprising in a country that continues to refuse to promote women’s rights and recognise gender equality.

“It is unconscionable, outrageous and utterly barbaric that at least one in 12 married women in The Bahamas have been raped by their husband, and that even more report being the victim of some other kind of sexual abuse,” said HRB secretary general, Paco Nunez.

“Even worse, as the UB researchers acknowledge, the numbers may only represent the tip of the iceberg; it is well documented that only a fraction of sexual assaults are ever reported, and there is no reason to assume this would not be the same for marital rape,” he told the Tribune Newspaper here.

“In fact, victim silence may be even more likely within a marriage, in the face of a callous society that has already turned its back in two referenda, and a husband who has shown he is willing to commit legally-sanctioned assault, and can do so with impunity.

“We are to be condemned as a society for failing to protect thousands of vulnerable women, and for allowing the sacred institution of marriage to be corrupted by aggressive, predatory behaviour. It is our hope that this new study will finally hold up a mirror to society and force Bahamians to see clearly on this issue.”

He said HRB is encouraging the government to bring an end to this nightmare once and for all.

“We urge them to move swiftly to prevent thousands more women from being harmed, traumatised and broken in this way. It is time for us to accept that all women – and also many men who find themselves trapped in unhealthy marriages – need, deserve and should be entitled to protection under the law,” Nunez added.