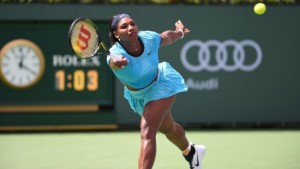 Serena Williams of USA returns the ball to Victoria Azarenka of Belarus in the women’s final of the BNP Paribas Open at the Indian Wells Tennis Garden.

Azarenka blasted five aces while Williams was undone by 33 unforced errors and five double faults in the 88-minute match.

Azarenka, a former world number one now ranked 15th after battling injuries, has been a thorn in the side of Williams over the years and she became the first player to deny Williams a trophy on four occasions.

Heading into the contest Azarenka and Serena’s sister, Venus, were the only players to have beaten Williams three times in finals.

The 13th seeded Azarenka also thwarted Williams’ bid to become the first three-time winner of the Indian Wells women’s title.
Azarenka got two early breaks at the beginning of both sets against Williams before closing out the match in front of a crowd of about 15,000 on the main stadium court when Williams sailed yet another forehand long.

Azarenka held serve in the first set to take a 2-0 lead that the erratic American couldn’t dent.

Williams even got caught standing still and admiring a shot at game point in the eighth game, allowing Azarenka to hit a slow forehand winner into the open court.

Out of sorts to start the second set, Williams quickly found herself in an 0-3 hole, smashing her racquet on the ground after dropping serve in the third game before tossing it backwards over her shoulder.

She briefly came to life to regain one break, but was unable to mount a charge.

Azarenka duly served out the match, adding a second title to the Indian Wells crown she captured in 2012 and earning $1.02 million for the victory.

With the victory Azarenka will also return to the top 10 in the world for the first time since 2014, moving up to number eight.

But she was unable to close the book on one of the darkest chapters in her tennis career.

Her last win in Indian Wells was 2001 when she beat Kim Clijsters.

That sparked a lengthy boycott by both Williams sisters with Serena returning in 2015 and Venus making her long-awaited return this year but losing to a qualifier in her opening match.