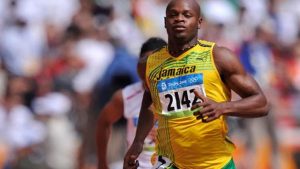 Jamaica’s Asafa Powell will be hunting his 98th sub-10-second clocking of his career as he leads three other Jamaicans into action in the IAAF World Challenge Series at the 66th edition of the Boris Hanzekovic Memorial in Zagreb, Croatia, today.

Andrew Riley, who was third in the 110m hurdles a few days ago in Berlin, will be back in action along with long jumper Damar Forbes and 400m hurdler Kaliese Spencer.

Powell, who recorded his 97th sub-10 time when winning in Zurich last week in 9.92 seconds, looks set to add to his unique record today whether he wins or not.

Powell, who will be 34 years old in November, will line up against Great Britain’s Adam Gemili and James Dasaolu, Aaron Brown of Canada, American Jarrion Lawson and Julian Reus of Germany.

Based on his current form and bubbling with confidence after copping the Diamond League 100m trophy, Powell should be too good for the field and draw nearer to the magical 100 sub-10 clocking.

Meanwhile, Riley who made it to the semi-finals of the 110m hurdles at the Olympics, will match strides with Americans David Oliver and Jarret Eaton, Frenchmen Pascal Martinot-Lagarde and Wilhem Belocian and Damian Czykier of Poland.

On September 4 at the Berlin Challenge Meet in Germany, Riley was third in 13.38 (+0.6) behind David Omoregie of Great Britain in 13.24 and Martinot-Lagarde with 13.24. Riley had behind him Eaton, Belocian and Vladimir Vukicevic of Norway.

Former IAAF Diamond League 400m hurdles champion Kaliese Spencer will try to end the season with a bang after struggling with injuries earlier on and failed to secure her Olympic spot on Jamaica’s team.

Spencer, who has a personal best of 52.79 seconds and a season’s best of 55.02, lines up against long-time rival Zuzana Hejnova of the Czech Republic and American Cassandra Tate.

And Damar Forbes, who reached the final of the Olympics long jump, will be in a less fierce field where he has most to fear from Fabrice Lapierre of Australia, and Kafetien Gomis of France.