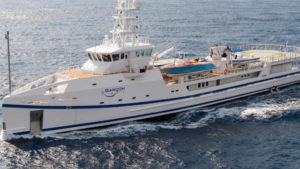 The Antigua and Barbuda Government said the crews of two yachts were asked to take them out of its territorial waters after it was confirmed that they belonged to Russian billionaire Roman Abramovich.

Abramovich is one of several Russian oligarchs, who were sanctioned by international governments, for their close political and business ties to President Vladimir Putin following the invasion of Ukraine.

The sanctions forced Abramovich to give up ownership of several of his profitable businesses including the Chelsea Football Club.

At yesterday’s post-cabinet media briefing, Information Minister Melford Nicholas said that Antigua and Barbuda was not one of the governments that imposed sanctions on Abramovich and it did not want to be faced with any legal challenges in the future.

“Our position was if there was in fact beneficial ownership of these yachts by these sanctioned individuals then we would have asked them to leave,” he stated.

The 67-metre explorer Garçon and 55-metre superyacht Halo were docked at the Falmouth Harbour in Antigua from early April to late July.

GPS on ship tracking website, Marine Traffic, showed the vessels are docked in Turkey, which is one of the few countries that has not imposed or enforced sanctions on Russia.