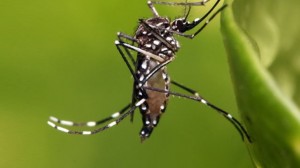 The Chief Medical Officer, Rhonda Sealy Thomas, Minister of Health Molwyn Joseph and the Chief Health Inspector Lionel Michael, yesterday informed the media that the CARPHA laboratory confirmed the first local Zika case. (Photo by Tameika Malone) The Ministry of Health has said there is no need for panic as the country confirmed a Gray’s Farm woman is the first Zika virus case here.
At an emergency press conference yesterday, Minister of Health Molwyn Joseph said the unnamed woman returned to Antigua from the Dominican Republic back in early April, when she started showing signs of infection. “Antigua & Barbuda joins 35 countries in the Americas and four countries of the OECS with laboratory confirmed cases of Zika. Investigations points to this being an imported case, relatives and household contacts of the case have been symptom free and today there is no evidence of local transmission,” Joseph said. Chief Medical Officer Rhonda Sealy-Thomas said it usually takes two to seven days and the patient is usually non-infectious in four to six weeks. As in the confirmed case, the woman received pain reliever and fever reducer as part of her treatment regime.
She will be observed to ensure that those immediately around the Gray’s Farm home will not be affected. Joseph said the ministry will provide the help the family needs to prevent possible spreading. He said the government will continue to focus on keeping the vector level down to prevent further spread of the virus.
The Zika virus is transmitted by the Aedes egypti mosquito which also transmits Chikungunya, Malaria, Yellow Fever and Dengue Fever.