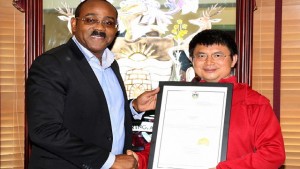 In presenting the Letter of Appointment to Xiao, Browne said he has been invested with the authority to promote investment, trade and commerce, business and tourism development, and negotiate with the authorities and business entities of all states and territories.

He will also advise the Minister of Foreign Affairs and the Minister of Tourism and Investment of the potential for economic cooperation, commerce and investment between Antigua and Barbuda and various states and territories.

Ambassador Xiao is the founder and owner of the powerful Tomorrow Holdings, which controls nearly 1 trillion Yuan (US$160 billion) of assets ranging from banks and securities houses.

During his visit to St. John’s, Ambassador Xiao and Prime Minister Browne discussed areas of investment, the expansion of the West Indies Oil Company and his collaboration on promotional campaigns for Antigua and Barbuda.