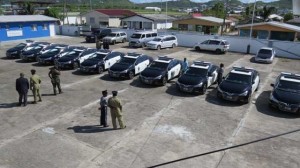 BASSETERRE, ST. KITTS, DECEMBER 9TH 2014 (CUOPM) – The Government of St. Kitts and Nevis has allocated nearly half a billion dollars for recurrent expenditure shared among the several ministries in 2015.

Prime Minister and Minister of Finance, the Rt. Hon. Dr. Denzil L. Douglas announced during a resolution on the Budget Estimates for 2015 in the National Assembly on Tuesday morning that the allocation of EC$466.7 million will represent an increase of 4.4% over the amount that was provided for 2014.

“While this includes a 3% increase in salaries for Civil Servants with effect from January 2015 and the payment of increments during the fiscal year, we have made every effort to otherwise contain expenditure. A total of EC$133.2 million is also being proposed for Capital Expenditure and Net Lending in 2015. This will be in excess of the 2014 Estimate by EC$25.6 million or 23.8%,” Prime Minister Douglas told parliamentarians and the Nation.

The Office of the Prime Minister has been allocated EC$70.3 million for its 2015 recurrent activities. This surpasses the amount that was provided in 2014 by EC$2.8 million or 4.1%. An amount of EC$19.4 million was also allocated for capital projects in the upcoming fiscal year.

“The Anti-Crime Unit will receive EC$32.7 million or 46.5% of the total recurrent allocation to carry out its mandate. The Unit, through its crime fighting and prevention activities, continues to play a critical role in protecting our citizens and creating a safe environment in which to live and do business. In fact, the work of this Unit is important to the economic development of our Federation especially where Foreign Direct Investment is concerned,” said Dr. Douglas, who added that the Anti-Crime Unit remains undaunted in its efforts to stamp out crime and will continue to develop and implement strategic initiatives to reverse the recent upsurge.

“One such initiative is to address the root cause of crime through the Unit’s Crime Prevention Strategy which focuses on at-risk youths with a view to redirecting their talents, energy and skills to more productive lifestyles,” said Dr. Douglas, who further disclosed that in 2015, more focus will be placed on community policing which has already brought tremendous returns for 2014 especially with the introduction of the Crime Stoppers initiative.

He said in this regard that the Law Enforcement Explorers’ Programme (LEEP) has been introduced and will lead to heightened visibility of the law enforcement agency in community outreach activities which in turn would lead to more effective law enforcement.

“The other Unit that will receive a substantial amount of funds is the Citizenship by Investment Unit. A total of EC$21.5 million will be distributed to this Unit which is charged with promoting and managing our Citizenship by Investment Programme. Most of the funds will be spent on fees for conducting proper due diligence on prospective investors as it is crucial that the integrity of our Programme is maintained. The Unit will also strengthen its operations in 2015 so that it can further enhance its efficiency and concretize our success with the Programme,” said Prime Minister Douglas.

The Ministry of Homeland Security and Labour has been allocated EC$12.2 million for 2015’s recurrent activities, representing a 3.3% increase over its 2014 allocation. An amount of EC$8.5 million has also been provided for capital expenditure.

“In 2015, this Ministry will continue to implement policies and initiatives aimed at enhancing Homeland Security, transforming labour relations and the industrial climate and promoting sustainable economic growth. In this regard, the Secretariat of Homeland Security will seek to enhance our border management system and will therefore explore the possibility of introducing e-kiosks at our ports of entry and improving the e-visa system as well as procedures at the passport office,” said the Prime Minister.

He said funds allocated to this Ministry will assist the Department of Labour with the implementation and management of transparent systems for the payment of the recently introduced long service gratuity to former employees of the hospitality and manufacturing sectors who would have retired after serving for ten or more years.

“With respect to the Fire and Rescue Services, the Ministry of Homeland Security and Labour will utilize a portion of its resources to provide educational programmes and conduct audits of institutions that rely on the use of chemicals in their organizations. It is expected that by working closely with public and private sector entities in these areas, we would be able to minimize risks and promote a culture of health and safety in the work place,” said Prime Minister Douglas.