Home / Sports / Anthony Davis may not have committed to re-signing, but don’t worry Lakers fans, he’s not going anywhere

Anthony Davis may not have committed to re-signing, but don’t worry Lakers fans, he’s not going anywhere 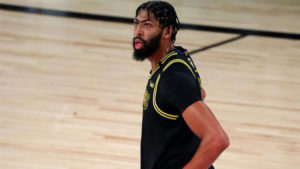 Give Anthony Davis credit. He is, at the very least, consistent. Even after winning his first NBA championship on Sunday, he still refused to commit to re-signing with the Los Angeles Lakers this offseason. “I have no idea.” Davis said when asked about his impending free agency, “I had a great time in L.A. this year. It’s been nothing but joy and amazement. Over the next couple of months, we’ll figure it out. I’m not 100 percent sure.”

It is the stance Davis has taken since the moment the Lakers acquired him last offseason. “I’m just focused on this season,” Davis said at his introductory press conference. “I don’t know what’s going to happen. I have one year here, so I’m going make the best of this year. And when that time comes around in the summer or, you know, whenever the season’s over — hopefully, around, you know, mid-June, after we just had a parade, and I need a couple days to think — then we can talk about that. But until then, I’m trying to do whatever I can to help this team win this year.”

In November, Davis refused to reject his hometown Bulls outright at an event in Chicago. “I mean, I am a free agent next year … but we will see.” Davis went to somewhat extreme lengths to force a trade to the Lakers, but leaving after a season wouldn’t exactly be unprecedented. Dwight Howard did under similar circumstances in 2013. He didn’t win a championship, but Kawhi Leonard did a season ago and still ditched the Raptors for the Clippers. Davis isn’t exactly going out of his way to assuage such fears.

But look at his co-star and representation, after all. LeBron James and Klutch Sports mastered the art of exerting leverage through short-term contracts. Davis has made it perfectly clear he does not want to be a full-time center. Refusing to sign an extension forced the Lakers to honor that request. If he wants input on the Lakers’ offseason moves, he’s free to demand it so long as his name is not signed on the dotted line.

Davis may not have committed to the Lakers, but it’s not exactly as though he’s given the league a reason to believe he’s available. Leonard’s decision came only a year ago, but it was unprecedented. Historically speaking, stars don’t leave defending champions. No credible reports have suggested that he is seriously considering his home town of Chicago or any other market for that matter.

Even if he was, his options in a cash-strapped NBA are fairly narrow. Assuming Otto Porter Jr. opts into the final year of his deal, the Bulls will be pressed up against the salary cap. Good luck clearing out a max slot during a pandemic, and the Lakers would not willingly participate in a sign-and-trade. Even if they would, many top teams are so close to the tax line that a sign-and-trade would trigger a hard-cap that they simply can’t operate under. That knocks perpetual free-agent destinations like the Warriors and Clippers off of the board. Dump almost every Eastern Conference contender into the “capped out” bucket while you’re at it, though there is one notable exception.

Technically speaking, the Miami Heat could clear out near-max cap space. Doing so would mean renouncing their rights to all of their own free agents, so say goodbye to Goran Dragic, Jae Crowder, Derrick Jones Jr. and Meyers Leonard. The Heat would surely make that exchange, but if Davis were interested in playing in South Beach, we likely would have heard that by now. LeBron just outplayed Jimmy Butler in a head-to-head matchup. It’s unclear why the Heat would hold more appeal.

Especially given the financial advantages of remaining with the Lakers. If Davis wants to operate under short-term contracts as James has, the Lakers have no such edge. But if, given his injury history and the uncertainty surrounding the entire league right now, he wants a long-term pact? The Lakers can offer him a fifth season and bigger annual raises (eight percent vs. five percent).

But more importantly and in the simplest of terms, they can offer him a champion. As Leonard found this season, the grass wasn’t greener on the other side of the border. Championship teams are rare and nothing is guaranteed. Davis hasn’t spelled out his priorities yet. The default, at his level, is usually winning. There aren’t years of rumors insisting that he plans to go home as Leonard did. There was a months-long trade saga presaging his long-term future in Los Angeles.

Davis can leave. No matter what he says or doesn’t say, that doesn’t mean he will leave. All signs still point to Davis re-upping with the Lakers and contending for championship No. 2