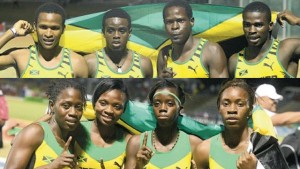 The Under-20 boys’ 4x400m relay (from left) Jaheel Hyde, Marvin Williams, Terry Thomas and Michael O’Hara pose with the flag at the end of their dominating contest & Members of Jamaica’s Under-20 4x400m relay team (from left) Yeaschea Williams, Andrenette Knight, Tiffany James, and Dawnalee Loney pose after winning the gold medal in 3 minutes, 37.96 seconds.

Jamaican relays teams completed a second sweep of the gold medals on yesterday’s final day of the 44th Carifta Games at the Kim Collins Track and Field Stadium in Basseterre, St Kitts, to end the four-day event on a high.

A day after the Jamaicans took all four gold medals in the 4x100m relays, they were again dominant last night, winning each 4x400m event with ease.

The Under-18 girls’ team of Junelle Bromfield, Satanya Wright, Shanique Walker, and Anna-Kay Allen held on to win in 3 minutes, 39.13 seconds ahead of the hard-charging Bahamians, who clocked 3:40.58 minutes, with St Kitts/Nevis taking the bronze in 3:51.26 minutes.

Despite a collision on the third leg, the Jamaicans held on to win the Under-18 boys’ race in a meet record 3 minutes, 12.07 seconds to beat the 3:12.63 minutes set last year by yet another Jamaican team.

Leonardo Ledgister, Devaughn Ellington, Jauvaney James, and Christopher Taylor made up the Jamaica team as Trinidad and Tobago took the silver in 3:14.23 minutes and The Bahamas were third in 3:18.12 minutes.

The British Virgin Islands took the silver in 3:46.43 minutes and Trinidad and Tobago were third in 3:47.55 minutes.

The Under-20 boys’ team ran 3 minutes, 09.13 seconds as Michael O’Hara extended the lead on the anchor leg, beating the British Virgin Islands with 3:12.43 minutes and The Bahamas with 3:16.27 minutes.