Another Caribbean act on Billboard 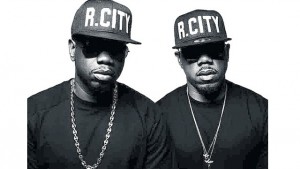 R City (formerly Rock City) are from the Virgin Islands

ANOTHER Caribbean act has made the Billboard Hot 100 Chart. Locked Away by sibling duo R City and singer Adam Levine from Maroon 5 is currently number eight on the publication’s main board.

Locked Away is currently on several European charts, and those of Australia and New Zealand.

R City have written a number of hit songs, including We Can’t Stop by Miley Cyrus, Pour it Up by Rihanna, Replay by fellow Virgin Islander Iyaz, When I Grow Up by the Pussy Cat Dolls, and If This Isn’t Love by Jennifer Hudson.

Recording their own songs, however, has always been a goal.

R City (which means Rock City, a nickname for the Virgin Islands) was formed while they were youngsters in St Thomas.

“We started doing music together since the ages of five and six respectively. In the beginning, persons weren’t very receptive because we were rapping and making hip hop music back then, [which] wasn’t as popular in the Virgin Islands as it is today. But over the years it has grown to become very receptive, especially since we started doing socially conscious lyrics, as well as rapping in our local Virgin Islands accent,” Theron told Splash.

Relocating to the US, they continued to pursue music as a career.

“We always write songs for ourselves, and then Akon gave us the opportunity to write a song for him. The song was called The Rain and it was featured on his second album Konvicted. We got paid US$5,000 for that song, so we decided to write for other artistes as well and before you know, we were known songwriters in the industry,” Timothy explained.

They next signed with Kemosabe Records (a company co-owned by producer Lukasz Gottwald, popularly known as Dr Luke), and Sony Music Entertainment).

While working on a project with Dr Luke in Los Angeles, a mutual friend informed the producer that the brothers were also artistes.

“It’s crazy the way it happened,” said Timothy. “We always made music, but that side of what we do was dormant. We got the chance to focus on it for the first time in the US with Luke.

“He came up to us and said, ‘Hey guys, let’s work on music for you!’ We were shocked. We didn’t have a deal. We weren’t working on an album, and he just felt something and had to say it,” he added.

Timothy spoke about the inspiration behind Locked Away.

“It’s a personal one because our dad was locked up for about six years, and during that time our mom held it down the whole time. There’s a different side of the song as well. It shows that real love. When you listen to our music, you can hear the passion and ‘realness’. We did it. If you’re trying to do something, do not let anybody stop you. Our music is a testament to that.”

The duo’s debut album What Dreams Are Made Of is set for an October 9 release. It will feature Locked Away as well as a collaboration with Tarrus Riley.