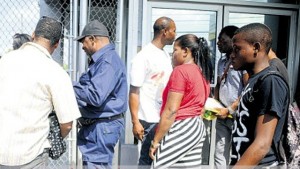 Jamaicans yesterday reacted in anger at the pending increase in fees for processing passport applications announced by the Passport Immigration and Citizenship Agency (PICA).

“This is more than unfair. This increase is really massive especially for the children,” Michelle Doyle said yesterday at the Constant Spring Road passport office.

“People at this time are struggling to make ends meet and then to be faced with such a massive increase in passport fees is really a challenge,” Doyle told the Jamaica Observer.

She was one of several people who felt that the jump in fees was poorly implemented and would place extra burden on citizens.

“I think it is a massive increase. It is too much to do one time, if you are going to do an increase do it in parts,” argued Joel Johnson, who was passing PICA’s Kingston office.

Theresa Hunt, a mother who was taking her daughter to school in Half Way Tree, shied away from speaking at length on the issue, but said she too was angry.

“It is totally unfair,” said Hunt as she stormed off along Constant Spring Road.

A man who identified himself only as Kirk said he too was not in support of the pending increase in fees.

“Well pon a big man level them (authorities) naw raise up people salary, but everything else a raise,” said Paul Williams, another member of the public.

“Everyday we hear about the many increase but still salaries of people still remain the same, how must people survive?” Salmon Brown questioned.

“While the Passport Immigration and Citizenship Agency may well have to increase its fees from time to time, right now, it is unconscionable to saddle the already overburdened population with increases that go up to a high of 44 per cent,” Smith said in a release yesterday afternoon.

However, while many people were left angry, there were others such as Ashawnie Tomlinson who voiced contrasting views.

“The increase is tough but I believe that people still are going to find the money for it because everybody wants to travel. Yes, it is going to be rough at first but at the end of it we are just going to get comfortable with it like anything else that raise,” said Tomlinson.

Vendor Delores Myers said she too felt concerned but added that people would just have to face the reality.

“The increases are going to be tough but we just have to do what we have to do,” said Myers.

PICA in explaining the increase said that that the current structure was introduced in 2009 and the new fees sought to cover inflation and movements in the exchange rate over the period.

In addition to increased fees, PICA said it will also introduce a same-day service at its Constant Spring Road headquarters and will offer expedited services of seven and five days at its regional office and outposts in Montego Bay, St Ann’s Bay, Portmore, May Pen, and Mandeville. Regular service at those points is currently 14 and 11 days.