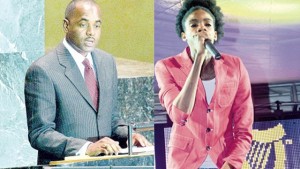 DANCEHALL artiste Alkaline has been given the thumbs up to perform in Dominica from the most unlikely quarters: Prime Minister Roosevelt Skerrit.

Alkaline is expected to headline at a concert at Saaman Gardens in Canefield, Dominica, on May 2.

According to Dominica News Online, on Monday Skerrit said that unless there is a security risk, Alkaline cannot be prevented from performing in that (Caribbean Commu-nity) Caricom state.

His comments came days after Arlington Wilson, vice-president of Dominica Association of Evangelical Churches (DAEC), said artistes like Alkaline should be barred.

The prime minister — who was a guest on a Dominican radio station — said to bar a Caricom resident from entering the country, who is not a security risk, would be in violation to that person’s right and the Caricom agreement. The treaty supports the free movement of people within the Caribbean Community.

“If you violate somebody’s rights, then there will be consequences of the law… There is nothing that the government can do to prevent the artiste Alkaline to come to Dominica. So we can protest… it is our rights to do so once we get permission from the police…people these days believe they can just protest how they want with no regard for the rule of law, and these are the same people who come and talk about rule of law,” the PM said.

“We have to be very careful that we don’t appear in anywhere in the region, not only in Dominica but throughout the region, to be targeting unnecessarily Jamaican citizens,” he continued.

Skerrit said the government is open to discussion with the DAEC on the matter.

Alkaline isn’t the only Jamaican dancehall act to come under fire from the DAEC. Tommy Lee Sparta and three members of his team were deported from that country in February 2014, a day after their arrival. They were placed in custody, under inhumane conditions, before being sent home.

Jamaica’s Ministry of Foreign Affairs and Foreign Trade has, however, advised they are seeking an amicable settlement.