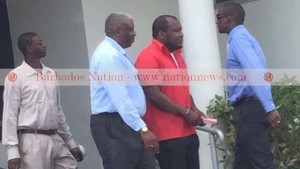 The Chief Executive Officer of a new airlines company in Barbados was arrested by police yesterday.

Reports indicate that Neville Gumbs of Phoenix Airlines, located at Hastings, Christ Church, was arrested by police from the Fraud Squad and was last night assisting with investigations into a financial matter with a bank involving $60 000 as well as other matters.

Phoenix Airways opened its doors three months ago and started advertising private charter services to the Caribbean as well as international destinations. It also recently advertised a vacation cruise for October 4 to 10 starting at US$854 per person. Its website also advertises flights throughout the Caribbean “starting as low as US$9.99 per person”.
A senior police officer told the WEEKEND NATION that police had been monitoring the business after receiving information that it had closed operations in St Kitts last year, leaving several passengers stranded.
Its Facebook page, which refers to the company as an inter-Caribbean airline based in Basseterre, St Kitts, confirmed this situation.

Police said they were inundated with calls yesterday from persons who had booked the cruise with Phoenix but could do nothing about these bookings since the cruise was scheduled for October. (MB)