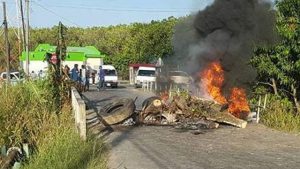 Residents of Todd’s Road, Caparo, block the roadway with burning debris during a protest over the poor water supply in the area and the condition of the roads.

Responding to cries for a steady supply of pipe borne water, the Water and Sewerage Authority (WASA), stated on Tuesday that the country’s water sources were impacted by the dry season.

Residents of Penal Rock Road, Penal, and Todds Road in central Trinidad staged fiery protests on Monday calling for WASA to “open the valves”. The angry residents claimed that the valves were turned on once every 10 days for a few hours.

And they were now relying on truck borne water.

In a release on Tuesday, WASA stated that Penal Rock Road, which spans from Penal to the Moruga Road, is supplied by several water sources with different schedules. The schedule has been impacted by the effects of the dry season and recent operational challenges in the area, it stated.

WASA noted that the utility would be embarking on a series of projects over the coming months to improve the reliability and sustainability of the supply to the area in the short to medium term.

The Authority would upgrade the Trinity Water Treatment Plant with the aim of increasing water production and install one kilometre of pipelines along Herrera Trace to reach currently unconnected residences.

For residents of Todd’s Road, WASA stated, the area including Dan Trace and Sonnylal Trace was recently adjusted in keeping with the Authority’s Dry Season Water Supply Plan with the aim of ensuring that the community is provided with a sustainable supply during this time.

“The Authority wishes to assure customers in these areas that every effort is being made to provide them an adequate water supply, in the face of reduced water availability due to the current dry season. A limited truck borne water supply is available and we will be having outreach officers visit the area to carry out an assessment to determine if there are any areas where the supply needs to be supplemented mainly in areas at the end of the supply system,” the release stated,

WASA added that it would continue to liaise closely with stakeholders including Members of Parliament, councillors, community representatives and residents.

“The Members of Parliament in both areas have in fact been in contact with representatives of the Authority to address the concerns of the constituents,” the release stated.

WASA will also be publishing a list of its revised water supply schedule later this week to better inform customers system-wide of their respective periods of supply.

Customers were also encouraged to institute conservation measures to ensure continued availability for the remainder of the dry season and beyond.