After Matthew, Death Toll And Extent Of Devastation in Haiti Still Uncertain 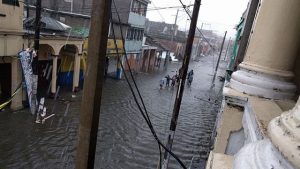 Flooding in Les Cayes in the south of Haiti, caused by Hurricane Matthew

PORT-AU-PRINCE, Haiti, Wednesday October 5, 2016 –Just how many people lost their lives and how much assistance Haiti will need are still to be be determined after Hurricane Matthew ravaged the impoverished nation’s southern peninsula yesterday.

“We’ve already seen deaths. People who were out at sea. There are people who are missing. They are people who didn’t respect the alerts. They’ve lost their lives,” interim Haitian President Jocelerme Privert said at a news conference.

The Category 4 hurricane made landfall along the southwestern Tiburon peninsula at about 7 a.m. as the first major hurricane to strike Haiti in half a century, downing trees, damaging and destroying houses and other buildings, and causing widespread flooding.

Among those reported to have died were a 26-year-old man who drowned trying to rescue a child who fell into a rushing river; a woman who was killed by a falling electrical pole in flooded Petit Goâve; and a man in Port Salut, too sick to leave his home for a shelter, who was killed when a wave crashed through his home. The day before when Matthew was heading towards the country, a fisherman died when his boat capsized in the waters churned up by the approaching hurricane.

Hurricane Matthew also caused the collapse of a major bridge, cutting off the storm-ravaged south from the rest of the country. The inability to use that Ladigue bridge in Petit Goâve, as well as communications towers being affected by downed trees, had officials worried that the emergency response and aid relief would be significantly set back.

The Miami Herald quoted Haiti’s Interior Minister Francois Anick Joseph as saying that it would take some time before officials know the full extent of the damage.

“The areas that are hardest hit are not accessible at the moment,” he said. “What we do know is a lot of houses have been damaged. Some lost the rooftops….Others were completely destroyed.”

Haitian authorities had tried to evacuate people from the most vulnerable areas ahead of the storm, but many were reluctant to leave their homes. Some sought shelter only after the worst was already upon them, making their way through pounding rain.

There are also concerns that Haiti, which is still recovering from a devastating 2010 earthquake and a cholera outbreak, could now face several risks – a potential spike in cholera cases as well as mosquito-borne diseases – as a result of large amounts of stagnant, dirty water left behind in the wake of Matthew’s passage.

The United Nations (UN) said Haiti is facing the largest humanitarian event witnessed since the earthquake which killed more than 200,000 people.

Haiti was to stage legislative and presidential elections on Sunday, but electoral officials have not yet announced whether the vote will be postponed.

The Miami Herald reported that the Dominican Republic, which shares the island of Hispaniola with Haiti, was largely spared the battering winds but was hit by torrential rain yesterday as well.

It said the country’s newspapers reported that four people, including three children, were killed in mudslides in the capital of Santo Domingo.

When Matthew was a tropical storm, a 16-year-old boy in St. Vincent and the Grenadines was crushed by a boulder as he tried to clear a pathway behind his house during the storm’s passage last Wednesday.