Home / Sports / After convincing win over Cavs, is it OK to believe in Celtics?

After convincing win over Cavs, is it OK to believe in Celtics? 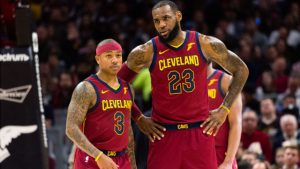 BOSTON – It’s irrelevant, social media tells us. The Celtics’ 102-88 demolition of Cleveland on Wednesday night means nothing. The Cavs were on the second leg of a back-to-back, were missing Isaiah Thomas, and, hey, haven’t we seen this play before? Cleveland coasts through the regular season — and runs everyone over in the playoffs.

Right? We shouldn’t be worried about a Cavs defense that, even with a recent stingy stretch, is still 27th in the league. Boston wasn’t particularly impressive offensively on Wednesday. Kyrie Irving finished with 11 points. Al Horford matched it. The Celtics’ bench (48 points) was nearly as productive as their starters (54). Boston shot 44.6 percent from the floor, 33.3 percent from three and still posted 102 points — comfortably.

We shouldn’t buy into the Celtics. Not yet, right? They have one starter barely old enough to buy beer and another who needs to borrow his ID. Jaylen Brown, 21, and Jayson Tatum, 19, were thrust into bigger roles when Gordon Hayward went down five minutes into the opener. All they have done since is respond. Brown has developed into a solid two-way player while Tatum is the best rookie in his class. Against Cleveland, Tatum’s 15 points led Boston’s starters.

“When a rookie comes in, or you’re on a new team, sometimes you’re trying to feel yourself out, don’t want to step on any toes, you’re not sure of about certain things,” Horford said. “They’re very aggressive, very assertive, aggressive offensively, knowing when to take shots. And on defense they just keep getting better.”

When is it OK to believe in Boston? When is it acceptable to suggest that the results of the last three postseasons may not predetermine what happens in the next one? Ask the Cavs: Boston is better this season. The Celtics’ switch-happy defense presents a real challenge. Cleveland connected on just 34.8 percent of its shots and 25 percent of its threes.

“Their defense was very good,” LeBron James said. “They were very in tune with what we wanted to do, execution-wise, offensively.”

The pro-Cavs argument begins with LeBron, and it’s a reasonable one. James demonstrated again on Wednesday that he is the best player on whatever floor he steps on, steamrolling several would-be Celtics defenders en route to 16 first-half points. “There’s nobody that can guard him the whole game,” Celtics coach Brad Stevens said. But James got little help. Kevin Love (two points) had one of his worst games of the season before exiting early in the second half with an ankle injury. Dwyane Wade missed eight of his 10 shots. A Kyle Korver 3-point barrage in the first half kept the deficit in single digits, but it wasn’t long before the Celtics blew the game wide open.

Help, presumably, is Thomas, who came out firing in his debut on Tuesday, scoring 17 points in 19 minutes. It was an awkward homecoming for Thomas, who didn’t play Wednesday night. He ruffled a few local feathers when he asked that his video tribute be put off until the Cavs return to Boston in February, and a crowd eager to greet him had to wait until the end of the first quarter, when Thomas finally made his way to the bench. It roared when Thomas was shown on the Jumbotron, but it tapered off quickly.

No question: The Cavs are incomplete without Thomas in the mix. “I don’t know who we are and who we can be until we get IT back consistently,” James said. At his best, Thomas is a dynamic scorer, a high-level second option who can take pressure off James in the halfcourt. But Thomas — who admitted before the game he felt sore after making his season debut — will have to prove his balky hip can hold up to a 30-minute-plus workload, will have to figure out how to play in a new system on the fly, and will have to defend a murderers’ row of point guards that includes John Wall, Kyle Lowry and, yes, Irving.

Impossible? No. A foregone conclusion? Wouldn’t say that, either. It’s time to accept that Boston’s challenge to Cleveland’s conference supremacy is, if nothing else, real. The Celtics effectively have two All-Star breaks, with the upcoming London trip offering eight days to recharge after a grueling early-season schedule and clean up a recent run of defensive mistakes. They have an $8.4 million Disabled Player Exception they are hell-bent on using to upgrade their bench and the tantalizing possibility that Hayward — who is still in the healing/rehab stage of his recovery from ankle surgery — could return before the end of the season.

Conference titles aren’t won in January, and history has shown that James dials it up to a different level in the playoffs. But the Cavs have more questions than they have had in any of the last four seasons, and Boston is stronger than ever before. Even if the outside world isn’t taking Boston seriously, everyone in that Cleveland locker room is.