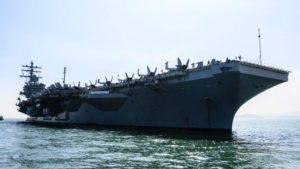 A US aircraft carrier and its strike group are now in the South China Sea in what could potentially become a tense standoff in hotly contested waters near Taiwan.

Speaking to Insider on Wednesday night, US Navy spokesperson Mark Langford confirmed that the vessels were on the move and operating in the South China Sea.

The aircraft carrier departed Singapore after making a scheduled port visit on July 22.

According to Langford, the carrier is “continuing normal, scheduled operations as part of her routine patrol in support of a free and open Indo-Pacific.”

The news comes less than a day after a report emerged about the Pentagon’s preparations to protect Speaker Nancy Pelosi with fighter jets and ships if she were to visit Taiwan.

Pelosi was scheduled to travel to the island in April. However, the trip was postponed after she tested positive for COVID-19.

Per The Financial Times, Pelosi is tentatively set to visit the island in August.

“If the US insists on taking its own course, the Chinese military will never sit idly by, and it will definitely take strong actions to thwart any external force’s interference,” said Senior Colonel Tan Kefei, a spokesperson for China’s Ministry of Defense.

If Pelosi does visit Taiwan, she would be the highest-ranking US official to visit the island since Republican Newt Gingrich made the trip in 1997.

The possibility of Pelosi visiting Taiwan comes at a tense time. China has grown more aggressive with Taiwan, flying more military aircraft near the island and even deploying an armada of sand dredgers to carve sand from the Taiwanese coast in June 2021.

The US generally regards Taiwan with “strategic ambiguity” — not recognizing its independence, while still providing it with weapons. CIA chief Bill Burns this month also commented that China is likely learning lessons from Russia’s failures in Ukraine, and calibrating the “how and when” of a potential invasion of the island.

Meanwhile, Chinese leader Xi Jinping has stated repeatedly that China must reunify with Taiwan, which it considers a breakaway province.

While Pelosi’s Taiwan trip has not been confirmed, she is scheduled to visit Japan, Indonesia, and Singapore

For now, Pelosi’s Taiwan trip has not been confirmed, but other stops like Japan, Indonesia, and Singapore are being considered for her Asia tour next month, per Bloomberg.