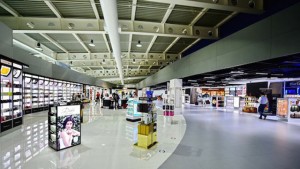 The facelifted departures lounge at St Maarten’s airport is now open, with a grand opening slated for this week.

It is the result of a significant renovation project to the departures area at Princess Juliana International Airport, following the airport’s new retail strategy.

“This is a very important moment for us as we are finally able to launch what began as our new retail strategy aimed at increasing the airport’s non-aeronautical revenues in accordance with the best practices all over the world,” said Regine LaBega, SXM Airport’s managing director.

The renovated lounge is part of SXM Airpot’s Capital Improvement Programme, which sought to give the airport a new “more attractive sense of place,” according to a release.

“We have already been receiving congratulatory messages from passengers that have been using the departure area, with some stating that they were not only impressed but felt proud of their airport becoming a beautiful international gateway,” LaBega said.