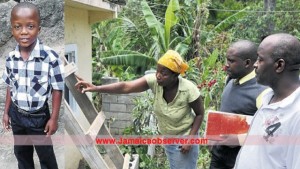 PIERCING screams from a despondent mother Tuesday night drew the attention of dozens of people in the sleepy farming community of Gordon Town, where the frail body of her eight-year-old child — Chad Michael Robinson — was found hanging by a shoelace.

The discovery rocked the rural St Andrew community and left several residents asking questions, even as allegations swirled that the case could have been a suicide.

Yesterday, police investigators who were still combing the area for clues, declined to comment on the claims, but this did nothing to quell the fury of irate residents who demanded answers as they speculated about the incident.

Residents reported that about 9:00 pm on Tuesday, eight-year-old Chad, his 10-year-old brother, and another childhood friend ventured over to their neighbour’s house, a location where they normally hang out and play.

The children, residents said, started arguing over a shoelace, which adults considered a trivial matter and did not bother to intervene.

Minutes later, two of the children returned without Chad.

Mother and stepfather of the child said that queries were made about the whereabouts of the boy and, when no word was forthcoming, they went over to the house to locate the child. That was when the frail and lifeless frame of the child was found dangling from the shoelace that was said to be the centre of the argument earlier.

“When I saw the body of Chad I ran over [and] tried to lift his body to take off the weight,” said Otis Reid, the child’s stepfather. He said that after several attempts he was unable to pull the cord and had to cut it.

Chad’s mother, Shelly-Ann Levy, said she tried everything to revive the child, who residents remembered as jovial and energetic youth. “Mi try everything; all CPR mi try to save mi son,” said Levy.

Yesterday, Levy tried hard to hold back the tears as she recounted the horrific ordeal when she found her child. With her voice trembling, at one time she held her stomach as she tried to regain composure.

Yesterday, as police continued their probe, residents gathered at the wooden gate to the concrete house perched on the hillside. “Right now, everybody in the area puzzled,” said one resident, who identified himself only as Mark.

He was among several residents who all whispered among themselves seemingly in a desperate attempt to make sense of what had happened.

The shock and grief would soon give way to superstition as some residents, not finding comfort in the attempts to come up with a logical explanation, claimed that there was more to the incident than meets the eye.

“What could make an eight-year-old act in that manner?” asked one woman, as others claimed that it could be the work of demons.

Police were, however, tight-lipped about their findings, but sought to assure residents that they would leave no stones unturned in their investigations.