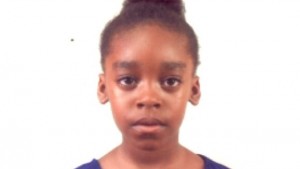 KINGSTON, Jamaica – The police have launched a manhunt for the culprits suspected of kidnapping a six-year-old girl in Kingston and are seeking the public’s assistance in locating the child.

Phaedra Martin of Berwick Road, Kingston 13, was reportedly taken from her father by unknown assailants on Ransford Avenue, Kingston about 1:30 pm.

She is of brown complexion, slim build and was dressed in her blue school uniform, blue socks, black shoes and carrying a pink bag.

Phaedra’s father allegedly picked her up from school and the two were walking along Ransford Road when two men, one armed with a knife attacked them.

The police report that the assailants then took the child in a motor car, which was parked on the roadway with three persons aboard, including a female, before they fled the scene.

The police are urging anyone with information pertaining to the whereabouts of Phaedra Martin and the culprits responsible for the attack, to contact the Counter Terrorism and Organized Crime Branch at 967-5680 or 967-3284, Crime Stop at 311, police 119 emergency number or the nearest police station.

Persons can also give information via the Stay Alert application which can be downloaded free of cost on the Google Play Store or the Unite for Change website.