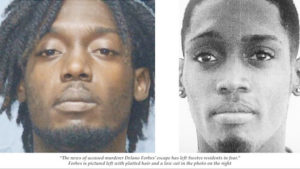 A second week is also over since Delano Forbes escaped from the police and has not been caught.

The police said they are still offering a $5,000 reward to any member of the public who can provide credible information that leads to the recapture of the 23-year-old who has three murder cases against him before the court.

The police announced the offer in a statement earlier this week and there is no indication whether the offer will increase the longer Forbes remains at large.

Forbes escaped from five officers who took him from the prison to a scene in Swetes on February 12 to gather evidence about one of the murder cases.

The police said that anyone with information regarding his whereabouts should immediately contact the Rapid Response Unit at 764-2310 or the Criminal Investigations Department at 462-3913 or 462-3914.

Lawmen said that all calls or reports will be handled confidentially.

They have described Forbes as “extremely dangerous” and are warning residents not to attempt to engage him if or when seen. The police are again appealing to the escapee to surrender himself to any police station.

It is alleged that last year he killed his fellow villager Wilfred “Bongo” Williams, and vagrants Lisue Samuel and Shawn Henry. The incidents occurred months apart and at different locations.