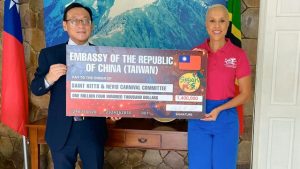 In an impressive ceremony on Monday 19 December, The Embassy of The Republic of China (Taiwan) was declared the Double Diamond sponsor of Sugar Mas 51.

This sponsorship to Sugar Mas 51 represents Taiwan’s overwhelming support for St Kitts Nevis. On the attainment of Independence in 1983, The Republic of China (Taiwan) was the first country to establish diplomatic relations with St Kitts Nevis. Since then, the thirty-nine-year-old relationship has blossomed into mutual benefits for both countries.

During that period, hundreds of nationals have benefitted from advanced Tertiary Education at various Universities in Taiwan including past pageant contestants and soca artistes.

She stated, “With this being the first full-format carnival since the pandemic, additional funds were needed to assist in the production of the overall event in order to have the best Sugar Mas ever”.

Ms. Hawley thanked Ambassador Lin for the enormous contribution and vowed to use the funds for the benefit of all stakeholders. Sugar Mas got on the way on December 2 and will run through January 3, 2023.