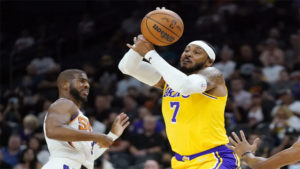 The Los Angeles Lakers faced the Phoenix Suns in Game 2 of the preseason but lost 117-105.

The scoreline looks more respectable than the game actually was because the Suns breezed through L.A. after the first three quarters. Phoenix led 102-74, but L.A.’s bench won the fourth quarter 31-15 to cut into the deficit.

Carmelo Anthony and Anthony Davis, however, did make appearances, with the former making his debut in the purple and gold.

It wasn’t pretty for the Lakers until Talen Horton-Tucker and Malik Monk picked up the pace towards the end of the third quarter, even though it wasn’t enough.

Here are three takeaways from the game:

With the Lakers bringing in 11 new faces for the guaranteed roster, it was logical that the players wouldn’t gel immediately. That was extremely evident against the Suns, which deployed the same starting five from the playoffs a year ago.

The Suns didn’t look like it missed a beat, even with the acquisitions of JaVale McGee and Landry Shamet.

Finding chemistry fast will be a key aspect for any success the Lakers hope to have, as the difference in continuity and chemistry manifested. Having LeBron James and Russell Westbrook may accelerate the process, but it still needs to happen quickly.

The Lakers were once again out-rebounded by the opposition. Phoenix won the rebound battle 52-40, and 12 of those came on the offensive glass for the Suns; for comparison’s sake, the Lakers managed just four.

Rebounding plagued the Lakers against the Brooklyn Nets, but in this game, much of it came down to the small-ball lineups. With who L.A. had out, L.A. frequently deployed lineups comprising one big and four smaller players.

DeAndre Jordan grabbed seven in 20 minutes, but he missed plenty as well by ball-watching. The smaller guards also have to do better at boxing out and following up on any missed shot.

After leading the Lakers with 15 points against the Nets, Malik Monk dropped a game-high 18 points on 7-of-11 shooting (4-of-7 from deep). The shooting guard battle is headed in Monk’s favor at this point, but he still has plenty of work to do on defense.

Cameron Payne and others usually had no issue blowing past Monk on dribble-penetration drives, but Monk’s scoring prowess can’t be overlooked