10-year-old boy charged with assault after dodgeball injury: ‘Our kids are racially targeted’ 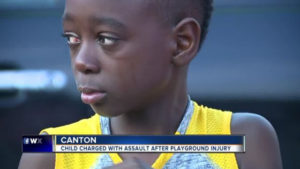 The mom of a 10-year-old boy received the shock of her life recently: a phone call from her local juvenile court, explaining that her son would be charged with aggravated assault, months after a playground game of dodgeball at his elementary school.

“I couldn’t believe it,” Cameishi Lindley, mother of soon-to-be-fifth-grader Bryce Lindley, told 7 Action News about the call, received from the Wayne County Juvenile Court in Canton, Mich., on July 24.

Now, because the boy being punished is black and the boy who was injured is white, some critics are calling the incident racist, while others — including celebrity comedian DL Hughley, who called the charge “ridiculous” — are coming to the boy’s general defense.

“Some 10 year olds were playing dodgeball on the playground at school. A white kid got hit with the ball. Then they charged the 10 year old Black child with assault,” tweeted film producer and self-dubbed “No. 1 race baiter” Tariq Nasheed. “This is why we should not prioritize any of these border issues, while our kids are racially targeted.”

The situation began back on Apr. 29, when Bryce received a one-day suspension from Ruth Eriksson Elementary, in Canton, for allegedly hitting a classmate in the face with a ball during a game of dodgeball. The child reportedly sustained a concussion, but because it was an accident, Lindley didn’t expect punitive measures against her son Bryce to go any further.

But the injured child’s mother — who declined to release her name or her child’s to the public — says her son had a previous medical condition that made him susceptible to head injuries. Further, she alleges to 7 Action News that this particular injury was no accident, adding that he “sustained facial tissue damage to his face. He had a black eye and a bruised nose.” She says that her son had already experienced similar incidents while engaging in physical activities at school, and that she “tried not to let it get to this point.”

The case, Wayne County’s assistant prosecuting attorney Maria Miller tells Yahoo Lifestyle, “was evaluated by our Juvenile Prosecuting Unit, and it was determined that there was enough evidence to for us to charge aggravated assault.”

Critics, however, have called out the charge as overly harsh and racist:

Some seem to imply that the incident appears to fit into a larger pattern — of what various studies have found to be disproportionate punishments between black and white children in America.

A 2018 report by the watchdog Government Accountability Group found that black students in grades K-12 are far more likely to be disciplined at school — whether through suspension or referral to law enforcement — than kids of other races. Further, noted the New York Times in 2017, “during the 2012 school year, black students [in Arkansas] were suspended five times as often as whites were, and little has changed since then. The racial discipline gap is not restricted to Arkansas, or to the South. The same report finds that several Northern states, including Illinois, Michigan and Wisconsin, rank above Arkansas in the black-white suspension gap.” Another study — from the Brookings Institution, looking at California schools — found evidence of the gap despite statewide efforts to reduce suspensions.

In the meantime, Lindley has created a fundraiser to assist her with Bryce’s legal fees and they are set to appear in juvenile court on Aug. 1st. She says that neither she nor her son knew about the injured child’s medical condition — nor did they know about the other school incidents — and feels the injured child shouldn’t have been playing a risky game in the first place.

Hughley’s Instagram post in defense of Bryce has attracted more than 21,000 likes since Sunday. “Ridiculous!! These are kids being kids!!” he wrote. “They charged a child?? If the kid has a medical condition… why is he participating in something where he can get hurt?? #ThisIsAmerica.” Other social media users have echoed his sentiments, one noting, “if your child has a medical condition and as the parent you fail to alert the school and teacher about it, then it’s your fault! Not the kid who was just playing a game of dodgeball. Smh.”

Lindley told the local news station: “This is a kid who was playing on a playground with his friends…I’m sorry that her child got hurt. I’d be sorry for any child that got hurt.”