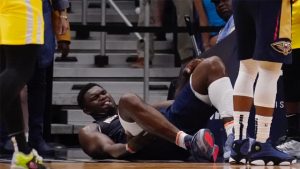 Ingram sustained a head injury after a first-quarter collision with teammate Naji Marshall. He left the game and was ruled out while being evaluated for a concussion. The team didn’t offer a postgame update on his status. The Utah Jazz won the game, 122-121.

Williamson left the game after a hard fall on the court following a blocked shot. The Pelicans later announced that he suffered a posterior hip contusion.

The injury happened early in the fourth quarter on a fast break. Williamson blocked a Jordan Clarkson jump shot and attempted a layup off an outlet pass on the other basket. Clarkson blocked Williamson’s shot from behind, and Williamson fell to the court on his backside. He rolled on the floor in pain for a moment before standing up and attempting to keep playing.

The Pelicans subbed him out for Herbert Jones at the next stoppage, and Williamson didn’t return to the game. The Pelicans didn’t offer a prognosis or timetable for Williamson’s return, and head coach Willie Green wasn’t aware of his status during his postgame news conference.

Williamson’s contusion doesn’t sound serious, but any injury to the fourth-year forward is cause for concern. When healthy, Williamson is one of the game’s brightest stars. During his most complete NBA season in 2020-21, Williamson averaged 27 points and 7.2 rebounds while shooting 61.1% from the floor as a dominant force in the post.

He played 61 games that season, the most of his NBA career. He played in just 24 games as a rookie in 2019-20 and missed the entirety of last season with a foot injury. His return to a young core alongside Ingram and CJ McCollum is cause for optimism that the Pelicans can develop into a playoff contender. The Pelicans are obviously hoping for a quick return to action for both Williamson and Ingram after a 2-1 start.