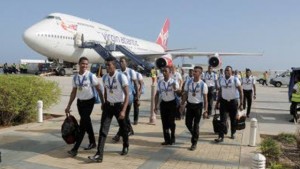 Members of the victorious West Indies Under-19 team shortly after deplaning in Barbados on Tuesday after winning ICC Youth World Cup in Bangladesh on Sunday.

BRIDGETOWN, Barbados (CMC) — World Under-19 champions West Indies returned to the Caribbean on Tuesday afternoon to a hero’s welcome following their triumph last Sunday at the ICC Youth World Cup in Bangladesh.

They were greeted at the Grantley Adams International Airport here by Barbados Cricket Association president and West Indies Cricket Board director, Joel Garner, along with WICB Chief Executive Michael Murihead.

An elated Captain Shimron Hetmyer said his side had remained confident despite their sluggish start to the tournament.

“I think the turnaround came after the game against England where we knew we had to win the other games to get through,” the Guyana left-hander said.
“I think after then the guys really got serious and really got down to their stuff, and that started in the practice from the next day. The guys then did everything in their power to make sure we won the next couple games and, even in the Zimbabwe game, had had some very positive performances.”

West Indies were whitewashed by Bangladesh in a warm-up three-match series before losing their opening match of the tournament to England by 61 runs.

However, they rebounded to crush minnows Fiji by 262 runs before eking out a narrow two-run win over Zimbabwe in controversial circumstances in their final group game to reach the quarter-finals.

West Indies then produced clinical run chases to beat Pakistan by five wickets and Bangladesh by two wickets in the semi-finals to clinch their spot in the final against previously unbeaten India Under-19s.

Yet again, they strung together a successful chase to win by five wickets, chasing a small total of 146.

Manager Dwain Gill said the confidence level in the squad had remained high throughout the tournament and pointed to the warm-up matches as being key to their preparation.

“It feels great, of course, being part of a World Cup-winning squad as [we] went there to win,” he noted.

“It started off quite challenging with the warm-up matches against Bangladesh, but that is the reason we went there — to get acclimatised to the conditions and see the opposition.”

Family members of the Barbados players, along with well-wishers, were also present to welcome the squad.