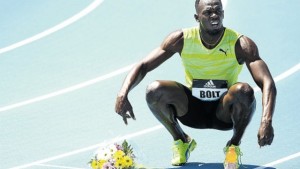 Bolt sits on the track pondering his next move after winning in New York last Saturday. Bolt ran 20.29 seconds in the 200m. (PHOTO: AFP)

NEW YORK, USA — Running just one event at August’s IAAF World Championships or pulling out all together if his form continues to dip below the stratospheric levels he has set for himself is not on the cards for double world record holder Usain Bolt.

The man who has rewritten the record books for the short sprints and has reignited track and field globally is going through one of his worst seasons since he turned professional, as he is yet to break 10:00 seconds for the 100m or 20.00 seconds in the 200m. Despite this drop of form Bolt gave very strong assurance that quitting is not an option.

“I don’t ever want anyone to say I have backed down from a challenge. I just want to work and get it right in Beijing,” he told reporters while trying to come to grips with why he was not running as fast as he thinks he should.

After running a disappointing 20.29 seconds to win the 200m at Saturday’s IAAF Diamond League meet in New York, Bolt was asked if he would consider running just one event at the World Championships in Beijing in August.

“I don’t think you should back out of a championship or a challenge because you don’t feel you are where you want to be,” Bolt said, “You have to go out and give the people what they want, I want to always compete at my best even if I am not at my best, I want to go out there and still do my best because all the fans want to see you compete and I want to work and do my best.”

So far this year, 14 men have run under 10.00 seconds in the 100m with just two going under 20 seconds in the 200m. Bolt who will defend both titles in Beijing after winning them two years ago in Moscow, Russia, says he and coach Glen Mills will have to figure out why he has not been able to run faster.

Pleasing his many loyal fans, Bolt said was one of the reasons he keeps pushing harder: “I have done so much for the sport, I have pushed the sport and myself over time so I know I have loyal supporting fans who will still support me,” Bolt said when asked how he responded to his fans sticking with him even when things were not going the way he wanted.

He was not naïve enough to think everyone was backing him, however. “There will be those who want me to lose as well, it’s just life,” he said philosophically, “but I give thanks for my fans and I will always go out and do my best. I always try to run my best and stay true to myself and my fans.”