Home / Sports / World Cup 2022: Germany upset by a Japan team that its own Bundesliga helped create

World Cup 2022: Germany upset by a Japan team that its own Bundesliga helped create 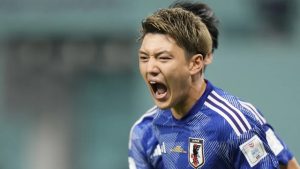 For long stretches of its 2022 World Cup opener here at the Khalifa International Stadium on Wednesday, Germany looked to be at its dominant best. It wove in and out of Japanese midfielders and defenders, and went ahead on a first-half penalty. It controlled possession and territory. It looked like a genuine title contender.

But then, in an exhilarating second half, the Germans were pegged back and beaten by a brilliant team that their own Bundesliga helped create.

They were two of seven players who turned the game on its head and who play in the German top flight. One, Maya Yashida, went to the Bundesliga specifically “to understand German football, German culture and the opponent,” as he said earlier this week. Others have taken their games to the next level in an increasingly multicultural league.

And that league, by extension, has taken the Japanese national team to another level. Twelve years ago, Japan drew 19 of its 23 World Cup players from its domestic league. Now it has been able to draw 19 of 26 from abroad, from many of the top leagues in the world.

Over the final 15 minutes, it finally punctuated its ascent with two goals, and held on for a massive win that, after one game, has turned Group E on its head.