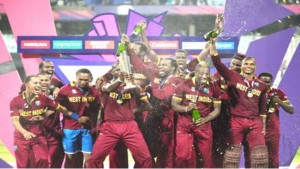 DUBAI, United Arab Emirates (CMC) — West Indies have slumped to third spot in the International Cricket Council’s (ICC) Twenty20 rankings, just a month after emphatically winning the Twenty20 World Cup in India. They have been bizarrely overtaken by New Zealand who bowed out to losing finalists England at the semi-final stage of the recent tournament. The Black Caps are now 10 points clear of West Indies, at the top of the standings on 132 points, after leaping from third place and overtaking both India and the Caribbean side.

Following their four-wicket victory over England in the T20 World Cup final at Eden Gardens on April 3, West Indies had vaulted into second spot, just one point behind India, who topped the rankings with 126 points. New Zealand were third on 120 points. Since then, however, New Zealand have gained 12 points without playing a single game, while the second-placed India have gained three and West Indies, in contrast, have lost three points.

According to the ICC, the West Indies suffered from the fact the points from the 2012-13 season, which included those from their maiden T20 World Cup triumph in Sri Lanka, have now been dropped. South Africa are three points behind West Indies in fourth, England lie fifth, while Australia sit in sixth place. In the One Day International rankings, West Indies have crept back into the top eight after gaining two points to edge ahead of Pakistan.They now have 88 points, just one clear of Pakistan, with reigning world champions Australia leading the pack on 124 points.

The Windies were ranked ninth at the September 30 cut-off date last year, causing them to miss out on a spot at the 2017 ICC Champions Trophy in England.