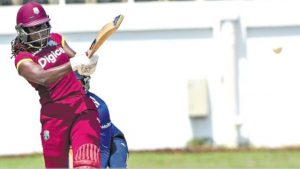 West Indies captain Stafanie Taylor on the attack during the second ODI against England at the Trelawny Multi-purpose Stadium yesterday. West Indies won by 38 runs.

Taylor, the West Indies captain, struck a polished 56 for her 24th career ODI half-century to guide the West Indies to 148 all out in exactly 50 overs in what turned out to be another low-scoring encounter on a low and slow batting surface.

Dottin, known more for her aggressive batting, emphasised her all-round class with a four-wicket haul that helped to dismiss England Women for 110 inside 42 overs.

England had a five-run win in the first ODI on Saturday after restricting West Indies to 144 in reply to their 149.

Yesterday, West Indies won the toss and opted to take first strike in brilliant sunny conditions at the venue.

They lost promising teenage opener Matthews, who was trapped before wicket to England’s off-spinner Laura Marsh, for 15 at 24-1.

That brought in Taylor, who, from the first ball she faced, was imperious and appeared head and shoulders above her teammates.

Matthews’ opener partner Shaquana Quintyne also went for 15 when she was caught lofting a catch to midwicket fielder Natalie Sciver off the bowling of left-arm finger spinner Sophie Ecclestone.

Taylor and Dottin (21) turned over the strike well to add 47 runs for the third wicket which stabilised the West Indies innings. Dottin played the sweep shot regularly against the spinners, while Taylor generally drove down the ground for singles to long off and long on.

There was a moment or two of anxiety.

Dottin, on six, was dropped by the bowler Marsh when the powerful batter hit aerially down the ground.

In the same over, perhaps still upset because of the missed chance, Marsh fielded a ball played back to her and hurled it in the direction of Dottin, who took evasive action to deflect the ball with her bat. Both umpires had a quick chat with the West Indies batters and the England Captain Heather Knight to ensure the situation did not deteriorate.

Dottin was later dismissed via the lbw route by spinner Alex Hartley to open the floodgates as West Indies slumped from 82-2 to 90-5.

But Taylor continued to stamp her class at the other end. Taylor, who was bothered by a hamstring issue while making nine in the opening game, slashed pacer Katherine Brunt’s short delivery back of point for four to bring up her 50.

She hit six fours off 87 balls before being dismissed by the relentless Brunt.

As Taylor continued to run out of partners she eventually gave her hand away, attempting to clear the straight boundary to a delivery from Brunt, but could only offer a high catch to Marsh at long-on. At that stage the score was 127-7 and West Indies tail-enders had to scrap to bat out the allotment of 50 overs.

In reply, the English batters also found the going tough.

Lauren Winfield was sent back lbw to left-arm pacer Erva Giddings for two at 12-1.

As pressure mounted due to some tight overs, Winfield’s opening partner, Tammy Beaumont (19) was bowled by the off-spin of Taylor at 33-2.

Off-spinner Anisa Mohammed, who got plenty turn and some bounce with her loopy off-spin, then bowled Georgia Elwiss for 16 at 56-3 inside the 24th over.

Though England kept the ticking over the scoreboard with one and twos, the lack of boundaries eventually caught up with them.

As the overs remaining dwindled and the run-rate crept upwards, the pressure continued to tell.

England Captain Heather Knight and Natalie Sciver both fell to the naggingly accurate wrist spinner Afy Fletcher for 26 and 27, respectively.

And Wyatt, who made an ODI career-best 44 in the previous match, was dismissed for seven also by Fletcher at 108-6.

The loss of those three left the door open for Dottin to apply the mopping up exercise at the lower end of the batting. Though entering relatively late in the innings, it worked out almost perfectly for skipper Taylor.

Dottin mixed slower balls with several searing full deliveries to good effect as the England batters appeared flummoxed. She finished with 4-19 off six overs and four balls, while Fletcher took 3-20.

The teams now turn their attention to three pivotal games at Sabina Park in Kingston, starting on Friday.

Those three games will count towards the ICC Women’s Championship contested between the top eight international sides, which will lead to automatic qualification for the top four teams to next year’s ICC Women’s World Cup.