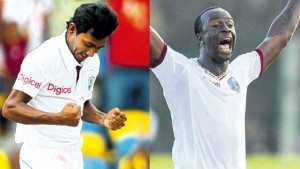 BISHOO… arrived to delay the inevitable. ROACH… supported with 36

BRISBANE, Australia (CMC) — West Indies’ preparations for the three-Test series against Australia were left in a state of crisis after the Caribbean side suffered a humiliating 10-wicket defeat at the hands of a youthful Cricket Australia XI here yesterday.

Resuming from their overnight 125 for seven in their second innings, West Indies managed to avoid the ignominy of an innings defeat when they rallied to 210 all out.

However, they left the hosts with a mere 10 runs for victory at Allan Border Field and the side, featuring six players on first-class debut, required 17 balls to complete victory and leave the Windies in disarray ahead of the first Test in Hobart starting December 10.

Holder was the only bright spark, top-scoring with 65, while tail-ender Kemar Roach scored 36 in a crucial 79-run, eighth-wicket partnership which spared the Windies blushes.

Starting the day on 26, Holder counter-attacked with four fours and three sixes off 99 balls, while Roach, unbeaten on nine overnight, offered great support in his 63-ball innings which included four fours.
When Roach fell to leg-spinner Cameron Boyce, Devendra Bishoo arrived to help delay the inevitable, scoring 16 from 19 balls in helping to add a further 32 for the ninth wicket.

He had struck three fours when he cut Boyce to Matthew Short at backward point and Holder continued to play his shots until he was caught at slip, attempting a reverse sweep off off-spinner Short.