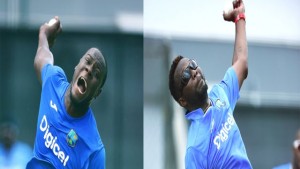 BRIDGETOWN, Barbados (CMC) — Captain Jason Holder was under no illusions yesterday about what West Indies needed to do in order to qualify for the final of the Tri-Nations Series. Ahead of their two final preliminary games, the hosts are bottom of the three-team tournament on eight points, four adrift of leaders South Africa and three behind World champions Australia.

“That’s exactly what it is: two matches, two wins. It’s about being consistent and making the improvements,” Holder told reporters here ahead of today’s all-important contest against Australia at Kensington Oval.

“If you look through the series, you’ve got Sunil (Narine) with a five-wicket haul and we haven’t got a hundred yet in the series, so that’s one of the boxes we need to tick off.“It would be good to see one of the top-four batsmen get a hundred and not only a hundred, but a big hundred in a match-winning cause. If we can get that, that would be a definite sign of improvement.”

Heading into the Barbados final leg, all three teams had won twice and lost twice, but the Proteas sat top of the standings after securing bonus points on offer. Sunday’s rained out game saw South Africa secure a further two points, which virtually put them in Sunday’s final but it left Australia definitely needing to win against West Indies in their final game to make sure of their place in the championship game.

As has been the case in recent years, West Indies have lurched from excellent to mediocre over the first two legs of the tournament and Holder said this was a problem they urgently needed to correct. “We have to be consistent. We’ve always been crucified for not being consistent in the past and that’s something we really stress in the dressing room,” the 24-year-old noted.

“We’ve gotten great improvement in terms of the individual stats. I just think it is important we look for small improvements and gradually look to build up and move up the rankings.”

He added: “It’s tough. We’ve been inconsistent for a number of years but we’ve also had some very, very good performances in-between. We’ve stressed on trying to break the game down as much as possible in terms of our batting.

“We need one of our top four batsmen to bat as deep as possible into the innings. We’ve been able to get partnerships… to get ourselves to a par total of anywhere around 260 in the Caribbeans is a good total.”

West Indies will key an anxious watch on the weather, however. Rain allowed just one over in Sunday’s game and more rain is forecast for the week as a tropical wave continues to affect the island. Holder said he was holding out hope for good conditions, both with the weather and the oval pitch.

“We’ll see what happens. There’s been quite a bit of rain around,” he said. “Yesterday (Sunday) I think the pitch got wet and I think we’re going on the same strip again so we’ll see what happens in the morning and, hopefully, it is a good strip for cricket,” Holder said.