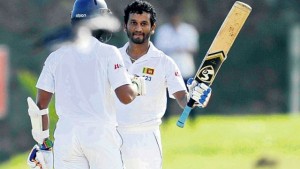 Sri Lanka batsman Dimuth Karunaratne celebrates his century on day one of the first Test match against the West Indies at the International Cricket Stadium, Galle, Sri Lanka, yesterday.

GALLE, Sri Lanka (CMC) — West Indies made a sluggish start to the opening Test here yesterday after opener Dimuth Karunaratne stroked his third Test hundred to put Sri Lanka on top on day one at the Galle International Stadium.

Asked to bowl first, the Caribbean side were kept in the field the entire day as Sri Lanka finished on 250 for two, with the left-handed Karunaratne stroking an unbeaten 135.

He was partnered at the close by Dinesh Chandimal who was on 72 not out, the pair having so far shared a third-wicket stand of 149.

The only two wickets to fall were those of Kaushal Silva for 17 and Lahiru Thirimanne, 16, as Sri Lanka capitalised on a good batting track to take early honours in the first match of the two-Test series.

Silva fell in the first session after adding 56 for the first wicket with Karunaratne, edging one behind off persistent seamer Kemar Roach.

Leg-spinner Devendra Bishoo claimed Thirimanne mid-way through the second session after the left-hander had posted 45 for the second wicket with Karunaratne, caught at mid-wicket by substitute Rajendra Chandrika.

However, Chandimal joined Karunaratne and the pair dominated the final session, putting on 101 runs without being separated.

Karunaratne has faced 288 deliveries and struck ten fours and a six — a hoist over mid-wicket off Bishoo that raised three figures — while Chandimal has counted six fours and a six off 146 balls.

Roach has taken one for 33 while Bishoo has picked up one for 78.

West Indies had begun brightly, however, with Roach especially going past Silva’s outside edge on several occasions.

While Silva survived the opening new-ball burst, he never settled, and Roach claimed him in the first over of a new spell. The right-hander prodded uncertainly at one on off-stump, giving wicketkeeper Denesh Ramdin a straightforward catch, six overs before lunch.

Karunaratne, meanwhile, was strong through the off-side, punching Shannon Gabriel to the ropes at cover for his second boundary in the pacer’s second over, before steering seamer Jerome Taylor behind square for his third.

He was unbeaten on 41 at lunch with Sri Lanka on 67 for one, and raised his seventh Test half-century about 40 minutes after the interval, when he cut Taylor to the point boundary.

Thirimanne, unbeaten on one at lunch, scratched around tentatively, and gave no impression of certainty. He was given a reprieve on six when he edged a loose drive off Taylor to Darren Bravo at slip, who floored the chance.

Luckily for the Windies, the left-hander lasted only ten more balls before he tried to clear mid-wicket with Bishoo, but succeeded only in picking out Chandrika at mid-wicket who took the catch on the second attempt, in the first over after the drinks break at 101 for two.

West Indies then squandered a great opportunity to make inroads into the Sri Lankan batting about 20 minutes before tea when Taylor, at mid-on, failed to hang on to Chandimal’s miscued pull off Bishoo, when the batsman had reached 11.

The hosts capitalised on their good fortune, navigating their way to 141 for two at the interval, with Karunaratne on 82 and Chandimal on 18, before piling the misery on West Indies afterward.

On resumption, Karunaratne inched his way to 95 before hoisting Bishoo over the ropes to reach his century in emphatic fashion, 50 minutes after the break.

The right-handed Chandimal also lifted part-time off-spinner Marlon Samuels over long-on for his only six and then notched his ninth Test half-century in the first over of the final hour with a single to cover off Bishoo.

Both remained positive even with the end nearing. Chandimal glided Gabriel to the third man boundary off the fourth ball of the day’s final over, and Karunaratne drove the right-armer straight for another four off the last delivery, summing up the Windies’ disappointing day.