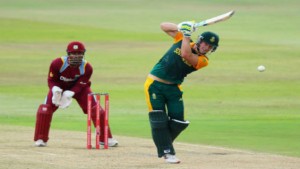 BASSETERRE, Saint Kitts and Nevis (AFP) – West Indies captain Jason Holder won the toss and put South Africa in to bat in the sixth match of the Tri-Nation One-Day International series at Warner Park in St Kitts on Wednesday.

West Indies have retained the same eleven that defeated Australia by four wickets on Monday to move to within a point of the Australians at the top of the three-team standings.

South Africa, who trail the hosts by three points following defeats in two of their three matches played so far, have made two changes to the side that squandered an excellent position and went down to Australia by 36 runs on Saturday.

All-rounder Chris Morris is fit again after picking up an injury in the opening match of the tournament in Guyana and returns to the side at the expense of fast-medium bowler Kyle Abbott while left-arm wrist-spinner Tabraiz Shamsi is picked ahead of orthodox slow bowler Aaron Phangiso.